China′s medicinal tiger bones and rhino horns: Tradition or travesty? | Asia | An in-depth look at news from across the continent | DW | 07.11.2018

Tiger bones and rhino horns may have a role in traditional Chinese medicine, but critics say that trendy health products with no medical value made from endangered animals are only a status symbol for the wealthy. 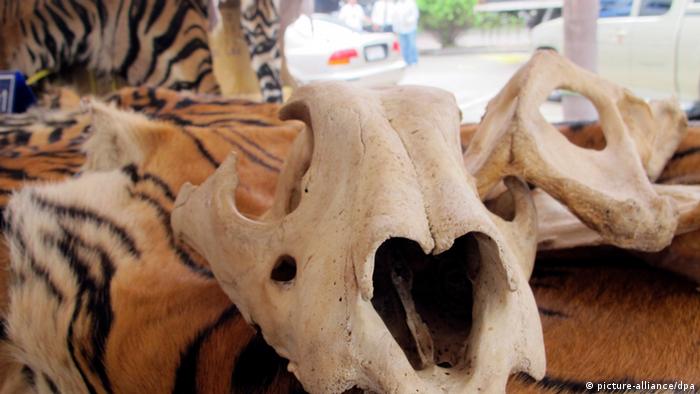 Last week China's State Council said the country would reverse a ban on the trade of products made from tigers and rhinos. Officials in Beijing said that trade volume would be "controlled" and tiger bones and rhino horns would only be obtained from animals in captivity for use in "medical research or healing."

There was no reason given for removing the ban and the announcement drew condemnation from wildlife activists along with doctors of traditional Chinese medicine and Chinese consumers.

"With wild tiger and rhino populations at such low levels and facing numerous threats, legalized trade in their parts is simply too great a gamble for China to take," Margaret Kinnaird from the World Wildlife Fund (WWF) said in a statement.

After the announcement, China's Sina Weibo erupted with criticism. One user pointed out on the Twitter-like social media service that when bones and horns are ground into powder, there can be no way to determine if they came from captive or wild animals. Another user asked what the difference is between tiger bones and pig bones and how can bones even be considered medicine?

Traditional Chinese medicine has a 2,000-year history and is still followed by millions of Chinese every day. It is based on using all natural ingredients including herbs and animal parts.

In traditional Chinese medicine, tiger bones are believed to help cure conditions like rheumatism and arthritis, along with erectile dysfunction. Rhino horns, which are composed primarily of keratin, a protein found in fingernails and hair, are thought to reduce fever and pains.

One traditional remedy is a medicinal tiger bone wine, made with ground tiger bones and up to 147 herbs and spices. Rhino horn is ground into a powder and is considered either to be a pain killer and a detoxifying agent.

How does traditional Chinese medicine work?

Zhang Li, a doctor practicing traditional medicine at Shanghai's Jinyang Community Medical Center, said the market for tiger and rhino products is driven by rich customers who have a need to show off social status, rather than seeking relief from medical issues.

According to Zhang, rhino horn powder has been shown to relieve symptoms of fever. However, the medical effect of tiger bone has never been determined.

"The idea that tiger parts, including meat, bones, teeth, paws and eyes have magical aphrodisiac functions might be purely based on the tiger's powerful image in traditional Chinese society," said Zhang.

Although China has been working hard to protect wild tigers since the 1980s, there are believed to be only a few tigers living in the wild. There are up to an estimated 6,000 tigers in China living in captivity on farms or in zoos and circuses.

For example, the Guilin Xiongsen Bear and Tiger Park in southern China is said to house 1,800 tigers. Over the past decade, the park has been wracked by scandal and accused of selling illegally produced tiger products.

Similarly, a 2015 report published by the periodical Southern Weekly said a farm in northeast China's Heilongjiang province was found to be storing the remains of more than 200 tigers in a refrigerator. The report said the farm considered the tiger carcasses to be worth a fortune and had been waiting for the lift of the tiger products ban.

Even during the ban period, there was an active black market for medicinal animal parts. Impossible to find at normal pharmacies and on online shopping sites, it's been an open secret that those with connections to zoos, farms and wildlife parks could access tiger skin and bone products. This supported a market for exclusive luxury goods sought by rich and powerful Chinese.

Zhang Hong, a professor of culture at Shanghai's Tongji University, told DW the real reason behind the ban's reversal is lobbying by interest groups.

"The traditional medicine industry is a huge market with large profit margins," said the professor. "The fact that it is a state-owned monopoly makes it even more profitable."

According to professor Zhang, interest groups managed to convince Chinese authorities to decide on such an unpopular policy using political propaganda.

"Traditional Chinese medicine is just one big lie and the doctors are scammers," an angry Weibo user said in a comment.

A Sina Weibo user questioned if there was any scientific proof behind the decision. "I believe the decision-makers have a particular disease called 'rich illness.' They can cure this illness only by overspending their big bank accounts."