China′s help brings political price for the EU | World | Breaking news and perspectives from around the globe | DW | 07.01.2011

Chinese Vice Premier Li Keqiang has held talks in Germany as part of a week-long visit to Europe aimed at deepening ties and stabilizing the euro. But the altruistic economic aid masks China's political strategy. 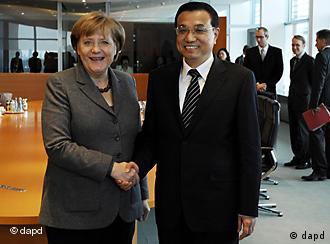 The playing field is almost level between Germany and China

This week's visit of Chinese Vice Premier Li Keqiang to Spain, Germany and the UK, accompanied by an entourage of over a hundred leading Chinese businessmen, is the latest vanguard of China's business-based diplomacy drive.

Li is a rising figure in Chinese politics. He is a member of the standing committee of the politburo - a small handful of men who run China - and, as the designated successor of Premier Wen Jiabao, could soon be one of the most powerful men in the world.

On Friday, he held talks with Chancellor Angela Merkel on a range of bilateral economic and political issues. Li also signed a raft of deals with leading German companies to the tune of around 11.3 billion euros.

The ostensible reason for the grand tour is obvious enough. Less than a year ago, the European Union overtook the US as China's leading trading partner, and China clearly has a big interest in stabilizing the euro - currently in the middle of a debt crisis that has already engulfed Greece and Ireland and is now threatening Portugal and Spain. The equation is simple enough: Investor confidence is shaky. Europe needs the money. China has it. Both sides win.

To this end, China has been increasing its holdings of EU government debt since the outbreak of the crisis. In a statement released Thursday, Chinese Vice Commerce Minister Gao Hucheng, who is accompanying Li, said, "China maintains confidence in European and Spanish financial markets and believes they will overcome the current crisis." 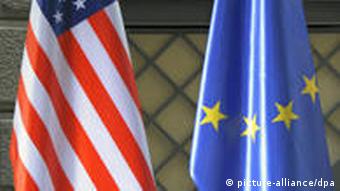 Eberhard Sandschneider, analyst at the research institute the German Council on Foreign Relations (DGAP), believes this is all reasonable enough. "China's interest is stability across the world, in almost all areas - concerning its own domestic stability, but also concerning regional, international and financial stability," he told Deutsche Welle. "So whatever China can contribute, it will contribute to help stabilize the world."

But there is a political price to pay. Recently, Wen Jiabao called on European leaders not to "pressure China on the yuan's appreciation." China's help provides it with traction on that issue, and can help drive a wedge between the US and Europe.

Jonas Parello-Plesner, senior policy fellow at the European Council on Foreign Relations, certainly thinks that the currency issue is a key priority for China. "By taking a larger stake in the European economy, China and the EU become more interdependent," he said. "And there is a political spin-off from that. It's an insurance policy against trade protectionism in Europe, and it deflects attention away from other issues like currency, where the EU is already less vocal than the US in requesting a hike upwards in the renminbi."

Parello-Plesner is particularly concerned by the bilateral approach taken by individual EU member states. "Seeing links to China mainly as a bilateral issue rather than a European-wide interest means accepting a weak position vis-a-vis Beijing," he wrote in a recent article. "China deals with Europe as it is, not how we dream it is."

This is not some devious Chinese strategy, but Europe's own doing, the analyst emphasizes. 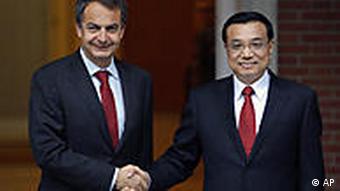 "China can't do otherwise, I would say," Parello-Plesner told Deutsche Welle. "There is no possibility to invest in a common European bond market, so they have to do it bilaterally. And they managed to get a lot of political traction in whichever country they buy out government bonds."

The uncertainty over which issues can be dealt with bilaterally with individual nations, and which need approval from the EU generally, have occasionally made things difficult for China.

"China plays the current reality of Europe really well," said Parello-Plesner. "It does to a certain extent suit China that it can play with Europe bilaterally, but sometimes, like with the arms embargo, they would be frustrated that almost everybody says, 'Yes, we're for lifting it,' but when it comes to the decision in Brussels it just never happens. A lot of things have stalled at the general EU level."

But the visit to Germany might present a blueprint for how Europe would like to deal with China. Since German companies have invested deeply in China, China does not have the same leverage with Germany as it does with the EU.

"Germany is interesting, because here you have a much more level playing field," said Parello-Plesner. "That shows the discrepancy, in the sense that here you have the largest trading partner for China in Europe and a European country where exports are also doing well. Made in Germany is in demand by China."

In an interview with the business daily Handelsblatt, German Economics Minister Rainer Bruederle said, "Improvements need to be made when it comes to market access for German firms on the Chinese market," citing in particular the insurance and banking sectors.

"On my visit to China, I often heard complaints that important regulations were introduced suddenly and without consulting the economic players involved," said the minister.

Parello-Plesner believes China has an open ear for such complaints. "China is saying, 'We know that you want a better level playing field for companies, and so we are willing to improve some things," he said. "But at the same time we need you to be more open to Chinese companies coming in."