An activist for the Tibetan language has been sentenced by a Chinese court to five years in prison for inciting separatism. Tashi Wangchuk was arrested after appearing in a New York Times documentary. 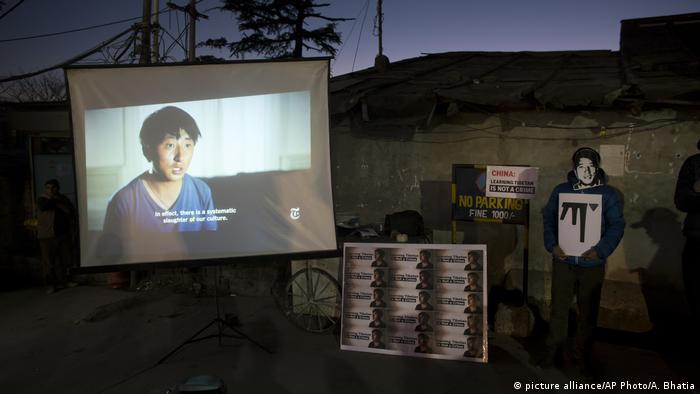 A court in China sentenced Tashi Wangchuk to five years in prison on Tuesday for "inciting separatism" after he campaigned to preserve Tibet's language and culture. Police had arrested Tashi in his hometown of Yushu in January 2016 — two months after The New York Times released a nine-minute documentary in which he advocated for the Tibetan minority — and have held him ever since.

"I believe he committed no crime and we do not accept the verdict," said his attorney, Liang Xiaojun.

The film followed Tashi on a trip to Beijing, where he attempted to get state media and courts to address what he describes as the diminishing of the Tibetan language and the "systematic slaughter of our culture." Tashi, described as a shopkeeper, spoke extensively in China's primary lingua franca, Mandarin, about the "pressure and fear" felt by Tibetans.

In the video, Tashi discussed Tibetans who have self-immolated to protest China's domination and said he would follow their example if "locked up or they force me to say things against my will." "I will choose suicide," he said. The video — in which Tashi talks about wanting to sue local officials for denying ethnic education — became the sole evidence used against him during his trial in January.

In the official version, China liberated the Himalayan plateau in 1951 and has guided its development ever since. Tibetans, however, say colonial authorities have exploited their natural resources and flooded the region with Chinese residents loyal to Beijing, diluting the indigenous culture and marginalizing the Buddhist faith. The government closed Tibet off to foreign media, but rights groups report increasing repression, along with a mass campaign to promote Mandarin in education and employment that Tibetans say leaves them economically excluded.

The regime rejects the accounts of minority groups in places such as Tibet and the Xinjiang Uighur Autonomous Region, where the indigenous population has also increasingly agitated for self-determination. In recent years, the government has discontinued Tibetan language schools and programs. And, as in Xinjiang, Tibet has received large numbers of new residents from other parts of China, along with a stifling security presence and heavy-handed political indoctrination aimed at ensuring loyalty to the ruling Communist Party.

"Tashi Wangchuk has shown incredible courage in his battle to progress the fundamental rights of the Tibetan people," Mattias Bjornerstedt, of the Swedish Tibet Committee, said in a statement.