China insists that the disappearance of tennis star Peng Shuai is being "maliciously hyped up." The Chinese player was not seen for weeks after she accused a senior Communist Party official of sexual assault. 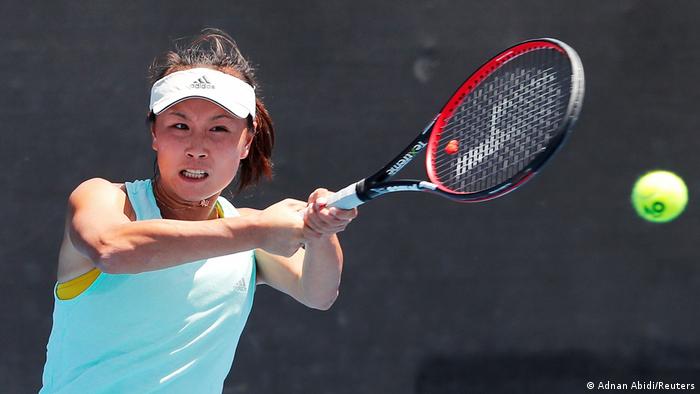 The 35-year-old's whereabouts became a cause of international concern after she alleged that former Vice Premier Zhang Gaoli had sexually assaulted her.

However, the foreign ministry spokesman told a press briefing that the issue of Peng Shuai was "not a diplomatic matter."

He was addressing concerns about Peng, who reappeared in public at a weekend tennis tournament for the first time since making her allegations in early November.

Lijian said the fact that Peng had also appeared in a video call with International Olympic Commission (IOC) President Thomas Bach on Sunday should provide reassurance.

"I believe everyone will have seen she has recently attended some public activities and also held a video call with IOC President Bach. I hope certain people will cease malicious hyping, let alone politicization."

Chinese tennis star tells IOC she is 'safe and well'

In the call, Peng agreed to stay in touch with Olympic officials, including having dinner with Bach in Beijing in January. She also said she was staying at her home and desired privacy.

Peng made her allegations against Zhang Gaoli on the Weibo social network in early November.

She said Zhang had coerced her into sex and that they later had an on-off consensual relationship.

Censors immediately deleted the post and have since prevented discussion of allegations on the internet in China.

The Women's Tennis Association said the IOC video call was not enough to address concerns about Shuai's wellbeing. The WTA has threatened to end lucrative contracts with China.

"While it is positive to see her, it remains unclear if she is free and able to make decisions and take actions on her own, without coercion or external interference," said a statement from WTA chairman Steve Simon. "This video alone is insufficient."

"They should be extremely careful not to participate in any whitewash of a possible violation of human rights," Akad wrote on Twitter.

Meanwhile, the Global Athlete movement of international sports professionals said the IOC had shown an "abhorrent indifference to sexual violence."

"Bach extended an invitation to Peng for dinner rather than ensuring her safety, and by doing so he made a mockery of a deadly serious situation that is regrettably all too familiar for many female athletes," said a statement from the organization.

The German arm of writers' group PEN was similarly critical of Bach in particular for helping China in its apparent effort to defuse the issue while the Olympic chief was visiting Beijing in preparation for the upcoming Winter Olympics. It cited media censorship and treatment of critical writers and also highlighted the Peng case.

"Where free speech is under threat, there can be no sporting fair play," PEN said in a statement. "The tolerant, if not affirmative, silence of IOC President Thomas Bach on these incidents is deeply shameful."

"Those who unreservedly promote sport as a non-political way of bringing people together lay bare their boundless political naivety and spinelessly subordinate themselves to a totalitarian system."