The move follows a total ban on the consumption and trade of dogs and cats in Shenzhen last week. The Humane Society has dubbed the measure a "potential game changer." 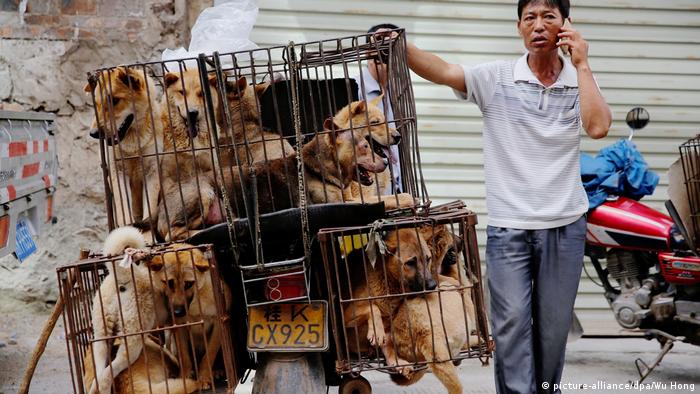 Animal rights groups are praising China following the introduction of a draft law to reclassify dogs as pets, rather than livestock.

"As far as dogs are concerned, along with the progress of human civilization and the public concern and love for animal protection, dogs have been 'specialized' to become companion animals, and internationally are not considered to be livestock, and they will not be regulated as livestock in China," read a statement issued by the Chinese Ministry of Agriculture, published on Wednesday.

Livestock animals are defined as those that can be bred for food, milk, fur, fiber and medicine.

The draft guidelines, which the Humane Society, an international NGO working for animal rights, dubbed a "potential game changer," have been opened to the public for consultation and define 18 traditional livestock species, including cows, pigs, chickens and camels.

The ministry also listed 13  "special" species that would be exempt from animal trading restrictions, including reindeer, pheasants, alpaca, foxes and ostriches.

The move is part of a series of steps that China has taken to respond to the coronavirus pandemic.

China's animal trade has been blamed as the origin of the coronavirus, as the virus is believed to have originated at a wet market in Wuhan, selling a variety of animals and meat including bats and porcupines and other rare species.

The virus is believed to have originated in horseshoe bats, which then passed the virus to humans through intermediary species, possibly pangolins, which were sold at the market.

Last month, China banned the sale, breeding, trading and consumption of wild animals, citing the possibility that diseases can be spread from animals to people.

Meanwhile, the city of Shenzhen, with a population of almost 13 million, passed a law last week banning the consumption of dogs, cats, and other animals. The move marked the first time a Chinese city has specifically banned dog consumption.

"This is the first time the national government in China has explicitly explained why dogs... are excluded from the official livestock list, stating that these are companion animals and not for eating," she added.

Dogs are considered a delicacy in some parts of China. The city of Yulin in the Guangxi region holds an annual dog meat festival in June.

The Humane Society estimates that around 10 million dogs are killed each year for the country's dog meat trade.