Security was tight at the airport as Chinese officials accepted the Olympic torch ahead of the 2022 Winter Games in Beijing. Activists have called for politicians and athletes to boycott the games over rights abuses. 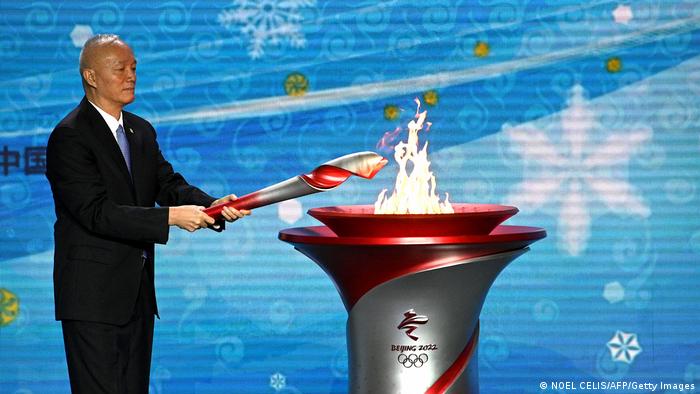 Cai Qi lights the Olympic cauldron, where the flame will be on display until the relay in February

The Olympic flame arrived in Beijing from Greece on Wednesday, as calls to boycott the games over China's human rights abuses gathered steam. Communist Party Secretary Cai Qi received the torch at an airport ceremony with very tight security.

On Monday, protestors interrupted the flame-lighting ceremony, which traditionally takes place in Greece's ancient Olympia stadium.  IOC President Thomas Bach then repeated his belief that the games represented a "politcally neutral ground" and that passing judgement on alleged rights abuses is not part of the IOC's remit.

The Winter Olympic games are scheduled for February 4-20, 2022, and will make Beijing the only city ever to host both the summer and winter games.

While the IOC is routinely alleged by activists to chose cities based on bribes, declining interest in hosting from North American and European cities has also left the committee with few choices. The 2022 hosting gig came down to just Beijing and Nur-Sultan, Kazakhstan, after Oslo, Norway dropped out of the running.

Critics of China's authoritarian government have accused the IOC of lending legitimacy to the regime by letting it host the upcoming games as well as the 2008 Summer Olympics. There have been calls for politicians and athletes to boycott the games over the country's system of forced labor camps for Muslim Uighurs in Xinjiang, the treatment of other minorities, such as Tibetans, and the crackdown on freedoms in Hong Kong.

The Chinese government has said that no foreign spectators will be allowed at the events, citing the COVID-19 pandemic. Athletes and journalists will have to remain in tightly controlled bubbles.