Beijing has promised to invest tens of billions in infrastructure projects across Africa. Both Chinese and African leaders have rejected claims that Beijing is trying to build a "new colonialism." 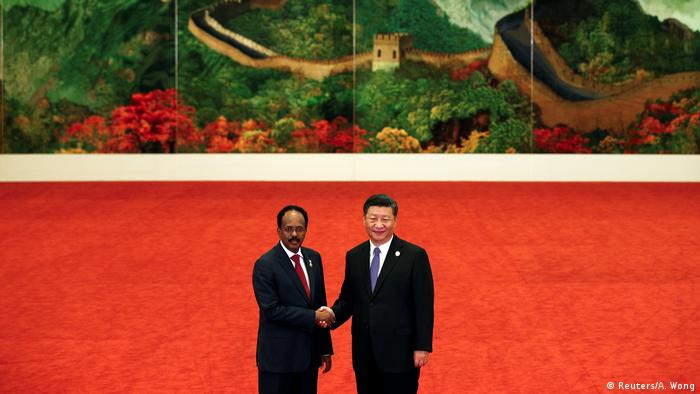 Chinese President Xi Jinping (above, with Somalian President Mohamed Abdullahi Mohamed) pledged $60 billion (roughly €52 billion) in aid to African leaders during a major summit in Beijing on Monday as part of China's push to boost its influence abroad.

Xi promised at the Forum on China-African Cooperation (FOCAC) that "China's investment in Africa comes with no political strings attached."

"China's cooperation with Africa is clearly targeted at the major bottlenecks to development. Resources for our cooperation are not to be spent on any vanity projects, but in places where they count the most," Xi said.

Beijing has poured billions in its Belt and Road initiative, a development and investment scheme focused on promoting trade connectivity that places China at the center.

Xi, however, stressed that Belt and Road "is not a scheme to form an exclusive club or bloc against others."

'A new version of colonialism'

Belt and Road has been criticized by many global analysts and leaders for its debt-heavy structures that unfairly burden the Asian, European, and African nations receiving its funds.

Despite this, several African leaders came to China's defense on Monday. South African President Cyril Ramaphosa said that FOCAC "refutes the view that a new colonialism is taking hold in Africa as our detractors would have us believe," alluding to a comment by Malayasian Prime Minister Mahathir Mohamed last month that China was trying to promote "a new version of colonialism."

President Paul Kagame of Rwanda also came out in support of Chinese investment, saying "Africa is not a zero-sum game. Our growing ties with China do not come at anyone's expense."

The $60 billion pledge includes eight programs that will be implemented over the next three years, ranging from industrial and infrastructure construction projects to scholarships for African students.

Xi announced that Africa's poorest nations would be given interest-free loans from China so that they incur less sovereign debt.

As economic ties between China and African countries tighten, the Asian giant could make major foreign policy changes and depart from its strict hands-off policy regarding military intervention on the continent. (09.12.2015)

Second-hand clothes, smuggling and the US-China trade war in Africa

US­ President Donald Trump has suspended duty-free treatment for apparel products from Rwanda. What appears to be a trade war between the US and one of the smallest countries in Africa, reveals a US-China rivalry. (28.08.2018)

China's presence in Africa is growing. Hot on the heels of the economic boom is a flowering of Chinese language schools, targeting young Kenyans –hoping to increase their chances of work on the competitive job market. (14.05.2018)