China has been investing heavily in the African market and is keen to stress the benefits to local businesses. Is that involvement an opportunity or a risk to Africa’s development and is Europe being left behind? 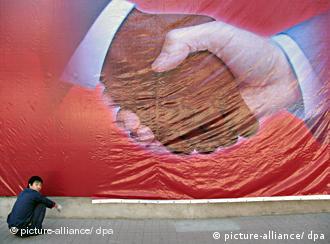 A billboard promoting the 2006 China-Africa summit.

On the Copperbelt in Zambia, investment in Luanshya Mine by China's Non-Ferrous Meter Mining Group Corporation (NFCA) has been welcomed by locals. A veteran of the mining industry who wanted to remain anonymous told Deutsche Welle that "[s]o far [the Chinese investors] are good guys because they are putting [in] a lot of money before production starts." For a small town whose future appeared bleak when mining production was shut down, the creation of an estimated 3,000 jobs is good news.

The warm welcome of Chinese investment in Luanshya is in stark contrast to the anti-Chinese sentiment in a town less than an hour away. The memory of a mine explosion that left 46 dead still lingers in Chambeshi. For many, graves located close to the mine are a daily reminder of the deaths of a colleague or loved one. More than four years after the incident, the community remains ambivalent about the reopening of the plant where the explosion occurred even if it will bring many jobs to the area.

Some still feel that their Chinese employers are to blame for the incident. Mukuka Chilufya, a safety officer who participated in rescue operations following the explosion, told Deutsche Welle that "maybe they could have received a bulk order and they were running out of time. So the night shift that were involved in the male dyke collided with the day shift that were involved in the female dyke. In fact, what is going to confirm that is that the Chinese who were knowledgeable of the consequences all were not in the factory when the explosion took place because they knew that something like that could happen." 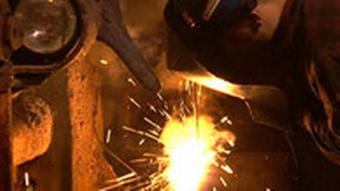 Most of the criticism surrounding China's involvement in Africa debate has been on the working conditions of the miners who are subjected to low wages and questionable safety procedures. The incident at Chambishi Mine in Zambia in April 2005 drew attention to this.

But as Professor Helmut Asche, director of the Institute for African Studies at the University of Leipzig, notes these conditions are no different from those that miners in northern China are subjected to. Since Beijing is unable to control the working conditions of its citizens, African governments are responsible for exerting effective control over Chinese investors so that they implement fair wages and adequate safety procedures.

China's African Policy states that it intends to be Africa's equal (economic) partner. Experts like He Wenping, director of the Institute of West-Asian and African Studies at the Chinese Academy of Social Science in Beijing, say that China's goals in Africa are more political than economic.

According to Asche, a change in China's Africa foreign policy began after the Tiananmen Square massacre when China needed more foreign allies. China's current African partners, who are in the Group of 77, provide it with more influence in the United Nations.

Asche feels that the import of cheap goods from China can have very different effects as is the case with the South African textile industry and the Ethiopian footwear industry. The protection of local industry in South Africa meant that the manufacturers did not modernize their techniques in order to be able to compete successfully with the Chinese imports. On the other hand, in Ethiopia where the local footwear manufacturing industry was not protected, production became more competitive and now Ethiopia is exporting footwear to China.

Zambians often say that "you thank the person who guides you at night when it is dawn." The relationship between China and Africa is still in its infancy, but as Asche told Deutsche Welle "it is crystal clear […] in scientific research that the Chinese investment in all its facets is positive for Africa." He goes onto say that current investment is doing more to strengthen economies than democracy and good governance. 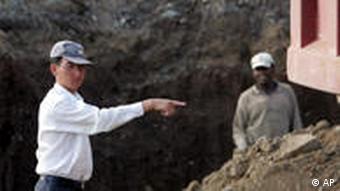 The role of Germany and Europe

Asche feels that Germany should do more to get involved in Africa: "…the German investors should […] be encouraged to become as courageous as the Chinese are. It is a crystal clear fact that China and its investors and not only the state-owned companies but also private investors see the African market a lot more positive than do quite a number of investors from European countries, and the Germans are certainly not among the most courageous."

In addition to those fears, Asche attributes the lack of increased trade between the two continents to the European Union's trade policy, which does not treat Africa as an equal partner as China does: “[EU Trade Policy] is a good example of how not to deal with partner countries and by way of comparison China all of a sudden stands out as, trade policy-wise, a fair partner to Africa in comparison with the EU."

Asche says that the growing trade between China and Africa is "an irreversible expression of the new multi-polar world, and European powers […] simply have to learn to live in this multi-polar environment in which there is no longer an exclusive relationship between the EU, the US and Africa."

After two years of lackluster political dialogue and insignificant progress, the EU-Africa strategy gears up in its goal to combat poverty in Africa and presents fresh schemes to do so, but some experts remain skeptical. (09.12.2009)