Hong Kong police say mainland China has confirmed that it's holding three missing Hong Kong booksellers, in addition to two others who went missing last year. The European parliament has called for their release. 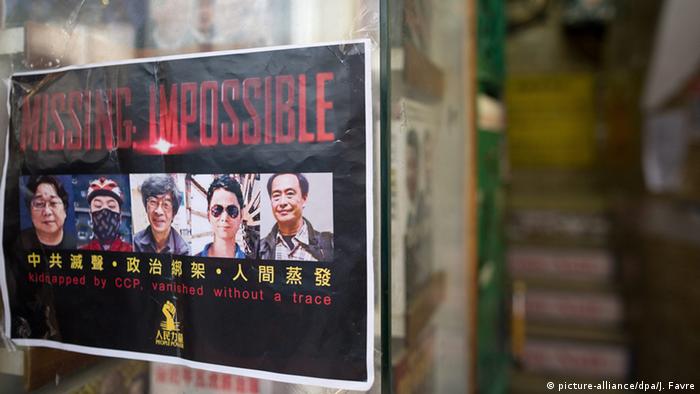 Police in Guangdong, the mainland Chinese province neighboring Hong Kong, had notified the arrests in an Interpol liaison message, said police in the former British colony once regarded as a safe haven for dissenters.

The booksellers have links with the Hong Kong publishing firm Might Current Media and its retail outlet Causeway Bay Bookshop (pictured above), which published works on political scandals involving China's communist leaders.

The trio being held in Guangdong were named as Lui Por, Cheung Chi Ping and Lam Wing Kee, who are shareholders or employees of the media company.

No details of the alleged crimes or their specific whereabouts were contained in the Guangdong message, except that they were suspected of being "involved in illegal activities on the mainland," said Hong Kong police.

The European Parliament said its resolution "calls for their immediate safe release."

"It also calls for the immediate release of all other persons arbitrarily arrested for exercising their rights to freedom of expression and publication in Hong Kong," said a statement issued by the European assembly.

A fourth person, who went missing in October while on holiday in Thailand and was thought to be Mighty Current publisher Gui Minhai, was shown on Chinese state television in mid-January.

The channel portrayed Gui, a Swedish national, as claiming responsibility for his part in the drink-driving death 11 years ago of a college student.

The fifth person, editor and British citizen Lee Boo, sent a handwritten letter to Hong Kong police in December in which he purportedly rejected their request for talks.

Lee's disappearance from Hong Kong in late December has been widely attributed to Chinese security agents operating in the former colony.

If so, an abduction would amount to a breach of the "one country, two systems" principle adopted by China when it took back control of Hong Kong from Britain in 1997.

Amnesty International spokesman William Nee said the latest disclosure about the trio's detention somewhere in Guangdong was "anything but satisfactory."

"The Chinese authorities need to end their smoke-and-mirrors strategy and come clean with a full and proper explanation," Nee said.

The reported Guangdong police confirmation of the booksellers' arrests coincided Friday with reports that authorities had begun a formal anti-corruption probe against the former governor of Sichuan province, Wei Hong.

In a short statement on Thursday, China's Central Commission for Discipline Inspection (CCDI) accused Wei of being "dishonest" and "disloyal to the party."

Sichuan, the focus of a crackdown by President Xi Jinping, was once the power base for former domestic security chief Zhou Yongkang. He was jailed for life for corruption last year.

Wei was party chief in Sichuan's city of Ya'an during Zhou's tenure.

Peter Dahlin of legal rights group Chinese Urgent Action Working Group has confessed to inciting opposition on Chinese state TV. A human-rights law firm has argued that his detention is based on "spurious accusations." (20.01.2016)