China's official statistics agency has reported that the country's GDP growth rate was right on target for the first quarter. Industrial production appears to have regained its footing after some turbulence last year. 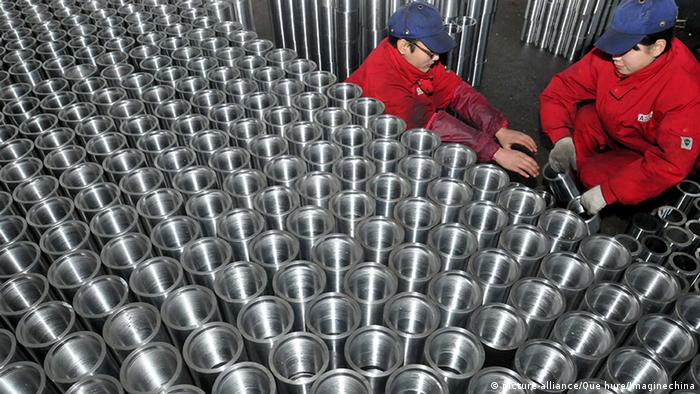 China's National Bureau of Statistics released figures on Friday in Beijing indicating that the country' gross domestic product (GDP) growth rate in the first quarter of 2016, spanning the period from January to the end of March, was 6.7 percent. That compares to a year-on-year GDP growth rate for 2015 as a whole of 6.9 percent, which was the lowest growth rate recorded in the past quarter century.

The numbers are in line with the goals set by the government during the period covered by the 13th Five Year Plan adopted by the Chinese Communist Party leadership in October last year, which sets a five-year annual GDP growth target range of 6.5 to 7.0 percent.

The statistics bureau also reported that national per capita disposable income was 6,619 yuan, a nominal growth of 8.7 percent year-on-year, and in real (inflation-adjusted) terms, 6.5 percent. There is a large disparity in income and wealth between urban and rural people in China, as shown by the statistics bureau's report that urban households had per capita disposable income of 9,255 yuan and rural households only 3,578 yuan. The per capita income of urban households was thus 2.6 times that of rural households.

The government "stepped up efforts to promote structural reform on the supply side while achieving an appropriate expansion of aggregate demand," the statistics bureau said in a press release. The country has been attempting to move the economy away from its heavy dependence on manufactured exports toward an increased emphasis on domestic consumer demand, greater urbanisation, reduced pollution and a healthier environment, and a stronger service economy.

Nevertheless, industrial production remains crucial to China's economy. The bureau reported the total value added of large industrial enterprises as having increased by 5.8 percent year-on-year in Q1 2016, with mining, manufacturing, electricity, heat, gas and water all showing increases in turnover. These numbers may help reassure analysts who had been concerned over the course of 2015 that China's core production was at risk of a steep decline.

However, some analysts have cast doubt on the reliability and accuracy of Chinese statistics, pointing toward government incentives to give the populace the impression that it is successfully managing the economy in accordance with its goals - a phenomenon that some suspect may afflict other countries as well, including India.