Panama has become the first Latin American country to sign on to Beijing's vast "Belt and Road" investment initiative. China has particular interest in Panama because of its location between the Pacific and Atlantic. 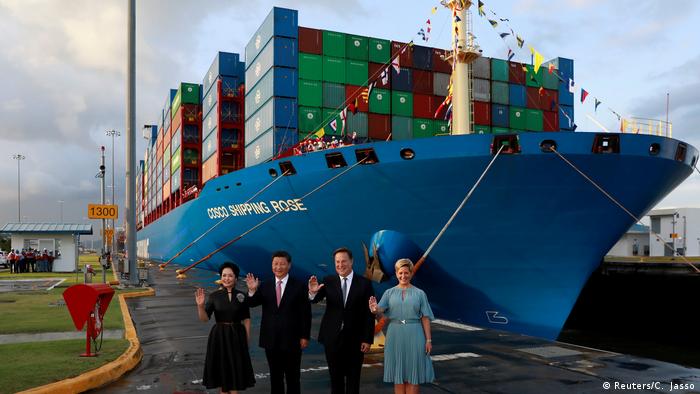 China only opened diplomatic ties with the nation last year, and with the new deals, Panama became the first Latin American country to sign on to Beijing's vast "Belt and Road" investment initiative.

What they agreed upon

Varela thanked Xi for his visit, and recalled that Xi once told him China's economy was an ocean.

"I want to complement those words by saying Panama connects two oceans, and his visit consolidates our country as China's commercial arm and gateway to Latin America," Varela said.

Xi said: "Our bilateral relations have had a strong start after only a year and a half." He wrote in a local paper that the two countries must become "cooperative partners of mutual benefit and shared profits."

Why is Panama important: China has particular interest in Panama due to its strategic location and its eponymous canal. It is also highly attractive for its political stability, growing economy and financial networks. Beijing hopes to use Panama as a logistics hub to help expand its trade in Latin America and the Caribbean.

Usurping US power: Beijing's growing role in Latin America has drawn the attention of the US, sparking fears it is losing influence in its backyard. A series of Latin American countries have made moves to strengthen ties with China, initially by disavowing their recognition of Taiwan. That loss is only being accelarated by the bluster of President Donald Trump against Latin American migrants. Nonetheless, experts have warned Panama faces possible reprisals from the US, the primary user of the Panama Canal, if it gets in the middle of a dispute between the two powers.

Further ties: The 19 deals are the start of growing ties. Panama and China are in the midst of negotiating a free trade deal.

Panama has broken links with Taiwan and established formal relations with China. The communist state is the second-biggest client of the Panama Canal. (13.06.2017)

El Salvador has become the latest country to ditch diplomatic recognition of Taiwan under Beijing's "One China" policy. Taiwan has said China is increasingly "out of control." (21.08.2018)

President Trump and Chinese leader Xi agreed to a 90-day stop to new tariffs in a step to slow an ongoing trade war. The meeting came on the heels of a G20 summit that called for revamping world trade rules. (02.12.2018)