The growing influence of China and India in Africa is being watched with skepticism. Many see the rising Asian economic powers as new colonial masters exploiting resource-rich Africa solely for their own benefit. 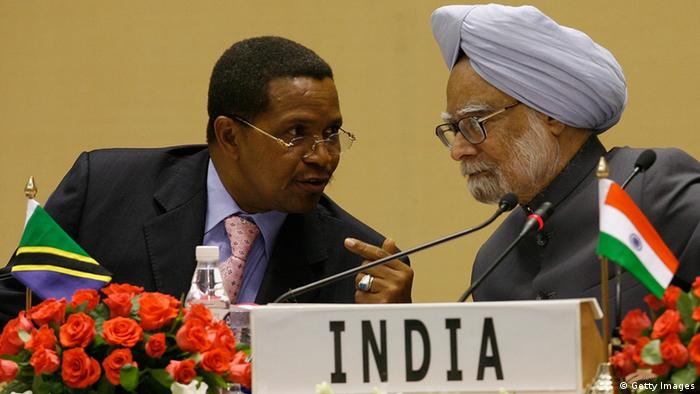 In August 2012, US Secretary of State Hillary Clinton brought the scorn of China and India upon her head. During a speech in Senegal, as part of her extensive trip through Africa, she derisively announced that, "The USA stands for democracy and human rights, even when it's easier or more profitable to look away in order to secure resources."

For a while now, China and India have been at the center of growing criticism for going on reckless shopping sprees in Africa in order to feed their growing economies back home. That includes, according to accusations, not shirking away from doing business with countries that have been shunned internationally, like Sudan and Zimbabwe. The citizens of Africa were supposed to have received little benefit these investments. With their resources now robbed, critics say it will be hardly possible for African countries to do business on equal terms. 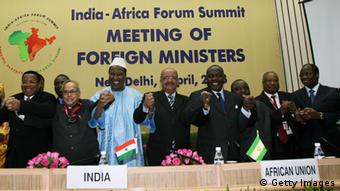 Haiyan Wang is the founder of the China-India Institute, a think tank in Washington. She is also co-author of the book, Getting India and China Right. In an interview with Deutsche Welle she said that the accusations are little more than clichés.

"When you look at China and India's activities in Africa today, you can see huge differences from the old days when colonial officers went to Africa to secure resources with impunity." Beyond oil and gas pipelines, China invests in infrastructure projects like streets, bridges and harbors, as well as in the construction of hospitals and power plants. India's contribution is even more far reaching, says Haiyan Wang. "India brings its entrepreneurship and its best ideas in order to generate jobs."

Africa's wealth of resources has always stirred commercial interest. Besides oil and gas, there are huge deposits of gold, silver, copper, iron, uranium and diamonds. 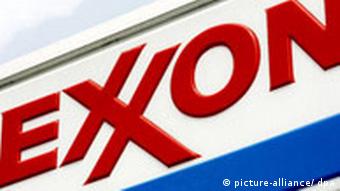 US companies, too, have often cozied up to unsavory regimes

In June 2012, US President Barack Obama laid out his new Africa strategy, which emphasized, above all else, his core issues of democracy and economic advancement, development and security.

Vaidhyanatha Gundlupet-Venkataramu, Professor of International Relations at the University of Texas in San Antonio, sees this as an almost despairing attempt at not losing some form of contact with Africa. He indicates that China, with 166 billion dollars (129 billion euros) in trade volume with Africa in 2011, has already overtaken the US as Africa's largest trading partner. "The US, with its own multinationals, like Exxon, already developed their own version of getting at those resources, also through partnerships with questionable regimes. That naturally influenced public opinion in Africa," the professor said.

The image of India and China is more positive in Africa. From the outset, they made their economic goals clear, said Gundlupet-Venkataramu. "That was seen as more honest. India is more popular than China in Africa." At present, trade levels between India and Africa have reached 60 billion dollars. The goal of Indian Trade Minister Anand Sharma is to reach 90 billion dollars by 2015. When talking solely about investments in Africa, the Chinese are a step ahead of the Indians.

In many African countries - from Ethiopia to Uganda, Nigeria to South Africa - it is not unusual to run into Chinese workers building a new street or train line. The well-planned Chinese strategy is aimed at maintaining close contacts with governments, and it typically operates with billions of dollars in loans. 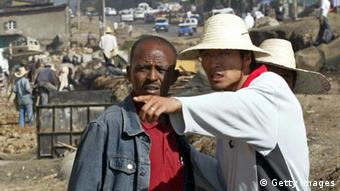 China is actively funding infrastructure projects in Africa, like this one in Ethiopia.

By comparison, India sends out a much less organized mix of businesses, such as Tata, Godrej, mobile phone and energy suppliers, according to experts. In addition, India does not tire of proclaiming its historical ties to Africa. India's national hero and father of independence, Mahatma Gandhi, even lived for a few years in South Africa at the end of the 19th century.

Like many African countries - especially in eastern Africa - India suffered under British colonialism. India makes up one of the largest contingents of the UN peace missions in Africa and is also hoping for Africa's support in its efforts to gain a permanent seat on the Security Council. The Indian Prime Minister Manmohan Singh has visited Africa four times in the last eight years, and in many African countries Indians form the largest ethnic minority.

"India and China are not rivals in Africa," Sujit Dutta, professor of political science at the Jamia Milia Islamia University of New Delhi, told Deutsche Welle. "They are active in different areas, have different strengths and in that sense complement each other. Rivalries will always crop up, since India and China are both aspiring powers and economies."

But in the future, China and India will not be alone. Brazil, Russia and Turkey are the newest entrants in the competition for influence in Africa.