China: 12 workers trapped in gold mine are still alive

The trapped miners managed to send a note to rescuers, urging them to send medicine. The workers have been stuck underground for over a week following a blast a gold mine in the Shandong province. 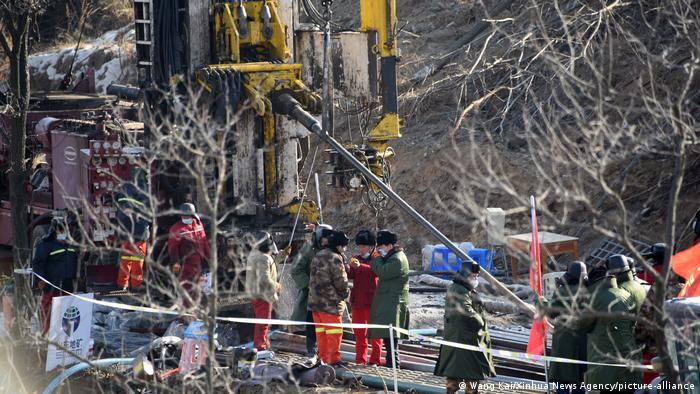 At least 12 workers who were trapped underground due to an explosion at a gold mine in eastern China are believed to be alive, local officials and media reported on Monday.

The blast occurred on January 10at the Hushan mine near Quixia city in the Shandong province, trapping 22 workers. The accident was not reported until 30 hours later.

The fate of the remaining 10 workers is still unknown. Four of the survivors currently trapped underground are believed to be injured.

The workers' communication system had been destroyed during the accident. Debris blocked the mine shaft, which also led to a delay in finding them.

On Sunday, rescuers managed to drill down into the mine and said they heard "knocking sounds." Rescuers also felt people pulling on iron ropes that had been lowered into the mine.

The miners managed to send up a note to rescuers detailing the conditions of the survivors, according to the official Xinhua news agency.

"We are in urgent need of cold medicine, painkillers, medical tape, external anti-inflammatory drugs, and three people have high blood pressure," the note read, according to a local government statement.

"We wish the rescuers won't stop so that we can still have hope. Thank you", the note concludes.

The mine belongs to Shandong Wucailong Investment Co Ltd. It is a subsidiary of an associate of China's fourth-biggest gold miner, Zhaojin Mining Industry Co Ltd.

Due to poor safety regulations, which are often not enforced, mining accidents have become common in China. The accident has led to severe criticism, and the sacking of two senior local officials.