Tens of thousands have taken to the streets in Santiago in a fresh day of anti-government protests. The local university was set ablaze and a church was looted, with religious iconography burned in the street. 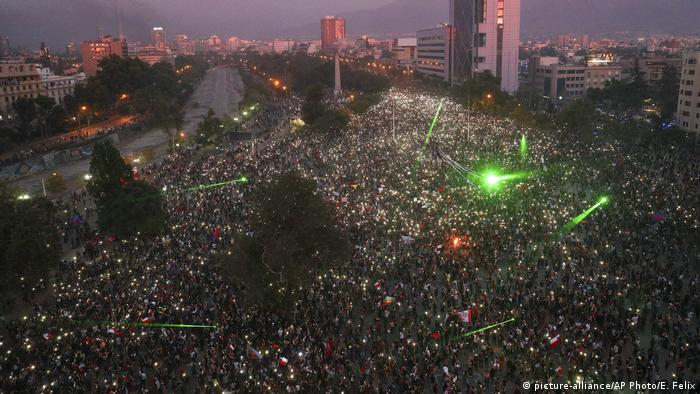 Around 75,000 people took to the streets in Santiago on Friday as part of ongoing anti-government protests in Chile. Local press reported the mostly peaceful demonstration as the second-largest since the protests broke out three weeks ago.

Hooded protesters also looted a Roman Catholic church in Santiago near the main site of the demonstration. They reportedly dragged statues of Jesus and furniture out onto the street and burned them.

Thousands gathered at Santiago's Plaza Italia square, where they chanted and held banners. Smoke billowed from the campus of a nearby university, where protesters started a fire.

Police had previously set up barricades in front of the university to attempt to limit damage. Chileans have been protesting against inequality and corruption

Why are Chileans protesting?

Protests began in the Latin American country in a dispute over a hike in subway fares in October, but have since evolved into an outcry over a wide range of social issues from pensions to government corruption.

Police used water cannon and rubber bullets to disperse protesters on Friday. Recent attempts by President Sebastian Pinera to appease protesters and to threaten them with a clampdown on vandals and looters have apparently not been heeded.

At least 20 people have died and 2,500 have been injured since the protests began.