A court in Chile has convicted three ex-intelligence agents of the 1974 murder of a leftist leader during the Pinochet military dictatorship. Thousands of opponents were systematically exterminated by the brutal regime. 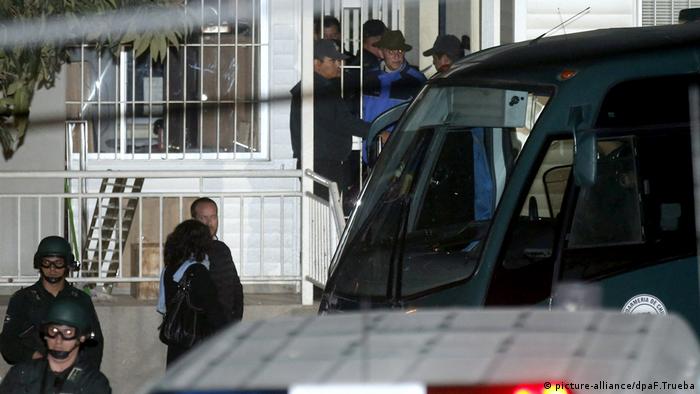 A Chilean judge on Wednesday handed down sentences to three members of General Augusto Pinochet's secret police for the assassination of Miguel Enriquez, the former head of Chile's Movement of the Revolutionary Left (MIR).

Enriquez was gunned down outside an MIR safe-house in a working-class suburb south of the capital, Santiago, on October 5, 1974.

Judge Mario Carroza ordered Miguel Krassnoff, a high-ranking member of Chilean intelligence agency DINA, to serve 10 years in prison for the murder. His two accomplices, Rodolfo Concha and Teresa Osorio, were each sentenced to three years with probation.

- Two Germans sentenced in Chile for kidnappings under Pinochet dictatorship

The judge told the court that dozens of DINA agents surrounded the house in San Miguel, where Enriquez was hiding out with his pregnant partner Carmen Castillo, before unleashing "an armed offensive…without requesting they surrender so that they could be detained."

Enriquez tried to flee across the rooftops of neighboring houses but was ultimately cornered and shot dead.

Krassnoff, 71, is already serving more than a hundred years in prison after being convicted of multiple counts of crimes against humanity in other cases.

Miguel Enriquez's son Marco Enriquez Ominami, who ran as a presidential candidate in Chile's 2009 and 2013 elections, wrote on Twitter that he had waited 43 years for justice.

"Justice takes time, but it is done (in the end)," he said. "They can express opinions, vilify or invent, but justice is done by the courts. Without hate or violence, we as a family value the ruling. My thoughts are with my grandparents, who died waiting."

The Marxist MIR mounted a campaign of armed resistance against the military dictatorship that took hold following the coup that overthrew Socialist President Salvador Allende in 1973.

The new regime sought to wipe out all forms of dissent, prompting many activists to flee the country. More than 3,000 Chileans were murdered by state agents during Augusto Pinochet's brutal regime between 1974 and 1990. Up to 40,000 people were imprisoned and systematically tortured.

Prosecutors have opened an investigation after a discovery of human bones on a Chilean riverside. The find relates to a German enclave linked with torture and killings during the dictatorship of Augusto Pinochet. (26.02.2014)

A Chilean judge has charged six people for the assassination of former President Eduardo Frei Montalva in 1982. Court documents show the murder was instigated by the right wing regime of Augusto Pinochet. (12.08.2017)