Twenty former Chilean intelligence agents have been jailed over forced disappearances during the Pinochet dictatorship. The crimes were committed under Operation Condor — a secret campaign to wipe out the opposition. 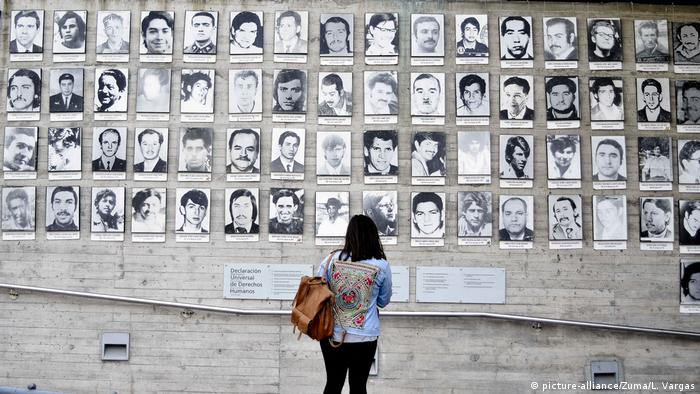 Thousands of people 'disappeared' during Augusto Pinochet's dictatorship in Chile

A court in Chile on Friday handed prison sentences to 20 ex-members of General Augusto Pinochet's secret police for the kidnapping and murder of 12 people between 1975 and 1977.

Most of the victims were abducted in Argentina, Paraguay and Bolivia before being taken to Chile to be tortured and killed. Some are still officially listed as missing.

Two of the former agents, Christoph Willeke Floel and Raul Iturriaga Neumann, were sentenced to 17 years in jail. Five others were given 15 years, while the remaining defendants were handed sentences ranging from 10 years to 100 days. More than 30 other ex-agents were acquitted.

In court, Judge Mario Carroza said Chile and the other three countries "not only agreed to detain the victims, but also created the conditions to lock them up and move them to our country with the sinister plan of confining them in secret places to interrogate and torture them and then proceed, with extreme cruelty, to eliminate them."

During the 1970s, the right-wing dictatorships of Chile, Brazil, Uruguay, Argentina, Bolivia and Paraguay collaborated under Operation Condor, the code name for a US-backed campaign of political repression and state terror.

Chile's secret police, the DINA, has been found responsible for carrying out multiple human rights violations, including killings, rape, torture and kidnappings under the country's 1973-90 dictatorship. Dozens of former soldiers have already been sentenced for such crimes.

The overthrow of Socialist President Salvador Allende in 1973 and the political repression that followed prompted many left-wing activists to flee the country.

More than 3,000 Chileans were murdered by state agents during Pinochet's rule. Tens of thousands of others were kidnapped, imprisoned or tortured. More than 1,000 people are still listed as missing.

Colonia Dignidad — a quest for justice

A court has sentenced two residents of a cagey German community in south Chile for their role in kidnapping 50 people in 1975. The 'Colonia Dignidad' community is known to have collaborated with Pinochet's regime. (20.10.2015)