Chechen activists still live in fear a year after colleague′s murder | Europe| News and current affairs from around the continent | DW | 15.07.2010

One year ago, one of Chechnya's best-known human rights activists was mysteriously abducted and murdered. Natalya Estemirova's death is still fresh in the minds of her colleagues, who fear it could happen again. 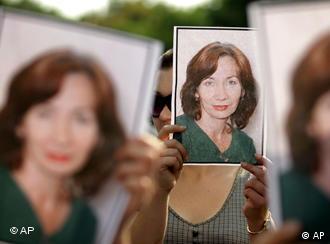 Estemirova's murder was a blow to the human rights community

Natalya Estemirova, a well-known human rights activist in Chechnya, had for years provided critical information on human rights abuses from the area.

Last summer, on the morning of July 15, Estemirova was abducted just outside her home in the Chechen capital Grozny, and later that day she was found dead in the neighboring republic of Ingushetia.

One year later, the murderers still have not been brought to justice. The head of Russia's main human rights organization Memorial, Oleg Orlov, has put responsibility for the crime on Chechen President Ramzan Kadyrov. Kadyrov accused him of slander, went to court and won. A criminal investigation against Orlov is still going on. 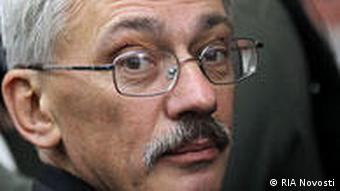 Orlov lost a slander case brought against him by Kadyrov

Meanwhile, investigators say the murder case has been solved, but at least one of the alleged murderers is said to have been killed in a shootout last autumn. According to Aleksandr Cherkasov of Memorial, in Russia it happens far too often that the dead are accused of certain crimes.

"It is very convenient to put forward someone who is guilty, and so much the better when this person cannot say anything in defense," Cherkasov said in an interview with Deutsche Welle. "We get the impression that the investigation has named a rebel who was killed last autumn as the guilty person, who, because Natalya annoyed him, abducted and killed her."

According to Cherkasov's colleague, Svetlana Gannushkina, the inspectors investigating the crime do not really believe this version of events.

"The investigation is being conducted in a direction which is very convenient for someone," she told Deutsche Welle.

There is no proof as yet whether that someone could be Ramzan Kadyrov. But new statements by the Chechen leader have been interpreted as clear warning signs by the human rights community in Chechnya. 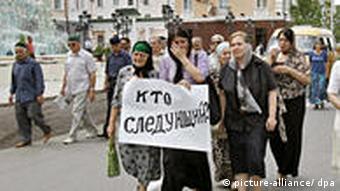 'Who is next?' reads the sign at memorial services for Estemirova last year in Grozny

"They receive large salaries from the West and in return they write all kinds of nasty things on the Internet," Kadyrov said about Memorial in a recent interview on Chechen television. "Therefore they are not my opponents. They are enemies of the people, enemies of the law, enemies of the state."

Memorial perceives Kadyrov's words as threats and may temporarily halt its activities in Chechnya. Orlov hopes that Western leaders will ask Russian President Dmitry Medvedev about the statements, which are in clear contradiction of Russian laws.

"How is it possible that in Russia, which considers itself a civilized country, such words are being said?" Orlov said.

"Specific people are being called enemies of the law. [Kadyrov] is talking about real people. How do these people feel themselves, when they have in fact been declared outlaws? These hard questions must be put before [President Medvedev] publicly, and that may save lives."

Russian human rights group Memorial has suspended operations in Chechnya following the murder of one of its most prominent activists, Natalya Estemirova. The group says it cannot risk the lives of other members. (19.07.2009)

Police say a prominent Russian activist who investigated human rights abuses in Chechnya has been found dead in the neighboring region of Ingushetia. (15.07.2009)