Peter Baines, whose charity has raised over 200,000 USD to help Gammy, a surrogate baby with Down Syndrome reportedly rejected by his Australian parents, tells DW the infant is receiving first rate care in Thailand. 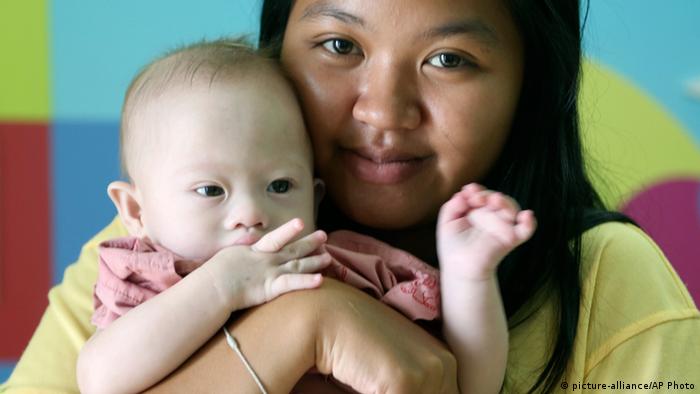 Gammy is one of twins born to Pattharamon Janbua, a 21-year-old Thai woman, who says she was paid by an unidentified Australian couple to deliver an in vitro fertilized baby. It has been reported that infant's biological parents only took his healthy baby sister with them to Australia, leaving Gammy behind with his surrogate family in Thailand.

The case triggered a public outcry and put a spotlight on transnational commercial surrogacy laws in both Thailand and Australia. It has also drawn media attention as Australia's child protection services are investigating the biological parents after it emerged that the father is a convicted child sex offender.

Hands Across the Water, an Australian charity that helps children in Thailand, launched an online fundraising campaign to help Gammy after the case became known, raising more than 215,000 USD since July 22. In a DW interview, Peter Baines, the organization's founder and chairman, explains how his charity got involved in the case and what the money will be used for.

DW: How did your organization get involved in the story of baby Gammy?

Peter Baines: Hands Across the Water was approached by one of our contacts in Thailand who made us aware of the situation with Gammy and his surrogate mother. As a charity we agreed to cover his medical costs, but in the meantime some well-meaning Australians launched an online fundraising campaign which gathered momentum.

Baines: "The priority will obviously be medical treatment and then as funds permit, education and therapy will also be incorporated"

The organizers approached us, as a registered Australian charity that supports at-risk children in Thailand, to take of management and administration of the funds. We are well equipped with many resources on the ground in Thailand, to provide the support needed for Gammy and his family.

Why did you think it was necessary to launch a fund-raising campaign in this case?

We did not launch the original campaign. The campaign was developed by a couple of Australians who heard Gammy's story and aimed to raise a modest amount to contribute to his medical expenses. We have all been extremely surprised and very humbled by the generosity of not just Australians, but people from around the world.

What will the money raised be spent on?

In the short term the money will be used to attend to Gammy's immediate medical needs. I am travelling to Thailand in a few weeks' time and I will meet with Gammy's family to discuss the long term care needs for Gammy. Hands Across the Water will then work on a program to ensure those needs are met now and into the future. The priority will obviously be medical and then as funds permit, education and therapy will also be incorporated.

What are your views on the practice of commercial surrogacy in countries likes Thailand?

This is not an area in which I have expertise so I would prefer not to comment. My focus, and the focus of Hands Across the Water, is to care for Gammy.

Do you think it is necessary for the child to come to Australia to get the appropriate health care?

An Australian couple’s decision to abandon one of its surrogate twins because of poor health has sparked international outcry. Crowd-funders have raised nearly $200,000 to help the mother and child. (03.08.2014)

A report in Australia over surrogate childbirth in Thailand has triggered public indignation. A Thai woman says an Australian couple left a Down syndrome baby boy with her, but took his healthy sister. (02.08.2014)

Gammy is being treated by excellent Thai doctors at the moment and we been contacted by Thai and Australian experts in cardiology and Down Syndrome to assist in Thailand if necessary. There is no reason to relocate Gammy away from his family when he is already receiving first rate care in Thailand.

There have been a lot of contradictory statements in the press on the issue. Are you aware of all the facts surrounding the case?

Certainly there have been considerable developments over the past week. I am not across all of the stories as my focus has been on the immediate medical attention required, as well as providing support for Gammy's mother.

Peter Baines is founder and chairman of Hands Across the Water, an Australian charity that helps children in Thailand.