Changing of the guard in the Women's Bundesliga 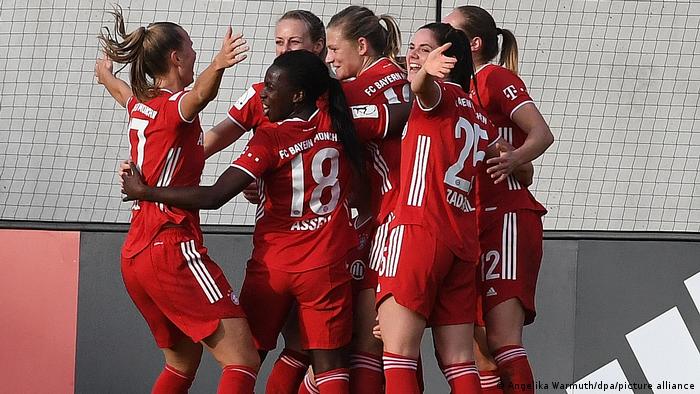 1. Changing of the guard — for now

Bayern Munich secured a dominant 4-1 victory over reigning champions Wolfsburg this past weekend. It is a changing of the guard in the Women's Bundesliga – for now.

There are still a lot of games left to play and we've seen in the past that a big point lead can easily be dropped. Nevertheless, it's still a result that needs to be taken seriously. Jens Scheuer's side have meant business for a while, but this win against Wolfsburg is huge.

They impressed with qualities we're accustomed to seeing from Wolfsburg: brutal efficiency, calmness under pressure and impressive self-belief. Visitors Wolfsburg played the better football in the first half and pushed more towards Bayern's goal, but Bayern scored out of nowhere with very little effort. Ultimately, that's the kind of quality you need in order to be crowned champions. "Considering our mindset, mentality and use of our chances, this was our best game of the current season," Scheuer said afterwards.

2. What this means for Bayern

Bayern currently have way more depth in their squad than any other team in the league. Players like Jovana Damnjanovic and Giulia Gwinn are out injured, yet Scheuer was still able to sub in world class quality with Carolin Simon, Linda Dallmann and Lea Schüller against Wolfsburg. These kind of moves can make a big difference moving forward.

Being top of the table adds pressure, and there's the added question of how they are going to handle being the front runner once the Champions League starts and the schedule gets busier. Time will tell, but right now they are the best team in Germany.

3. What this means for Wolfsburg

Wolfsburg are now in the role of the hunters, one they haven't been in for a while now. The last time Wolfsburg suffered a loss this big in the league was five years ago against Turbine Potsdam. It's time for them to accept that right now, they can't become champions on their own. They have to hope Bayern drop points while winning every game themselves.

"Bayern have a run right now and won't start wobbling," Wolfsburg's sporting director Ralf Kellermann told Sportbuzzer before adding: "They also know that we'll be back in the race once they draw a game."

This is still a tough task considering the obstacles they had to and still face. Key player Pernille Harder departed just days before the season started, then new signing Pauline Bremer tore her ACL and Ewa Pajor is out due to knee surgery. To top it off, captain Alexandra Popp suffered a capsule injury in her foot that has kept her out for longer than first anticipated. Popp and Pajor absence was noticeable during the Bayern game. A fast attacker would've worked wonders for Wolfsburg who lacked drive to goal, and despite the best efforts of 18-year-old Lena Oberdorf, Popp's mentality and leadership was also missing. 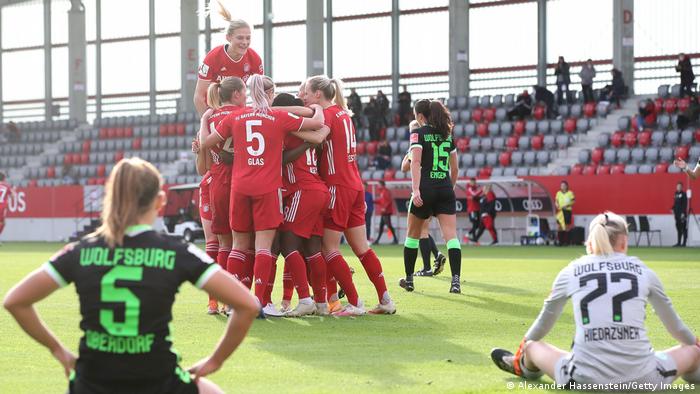 Wolfsburg were just short of their best. Fridolina Rolfö had an immediate impact off the bench, but the Swede is still working her way back to 100 percent after dealing with a concussion for months. Shanice van de Sanden is a great player but she's still adapting after making the move from Lyon.

"The result does not reflect the course of the game," Wolfsburg coach Stephan Lerch said afterwards. "I think we played a decent game in the first half and kept Bayern in check. But they were brutally effective, you have to acknowledge that."

When their injured players return, Wolfsburg will be capable of doing more than just being the first side to score against Bayern this season.

It is worth repeating that it doesn't always have to be the big names that steal the show.

Newly-promoted side Werder Bremen secured a dominant 5-3 victory over Duisburg this weekend that keeps them further away from the relegation places. Thirty-two year old Agata Tarczynska scored two goals and assisted one, and has been Werder's top scorer since the start of the season. The Polish international, who joined from Wolfsburg's second team prior to the start of the season, has made an immediate impact in a different shade of green white. Ten games in and she already has five goals.

For a player who has been at over ten clubs since 2005 and simply wanted to try another run in the Bundesliga, she has shown no sign of slowing down now.

In the Women's Super League in England, Manchester City and Manchester United played a thrilling 2-2 draw that saw the red side of Manchester come from two goals down to stay top of the table. Tobin Heath's goal to make it 2-1 was a screamer and the clip was uploaded onto Twitter soon after. At the time of writing, it has been viewed 1,3 million times on the social media platform. Who said people don't care about women's football?

Why don't Borussia Dortmund have a women's team?