Argentine President Mauricio Macri has arrived in Berlin to hold talks with German Chancellor Angela Merkel. The two leaders also announced progress on a free trade deal between the EU at the Mercosur trading bloc. 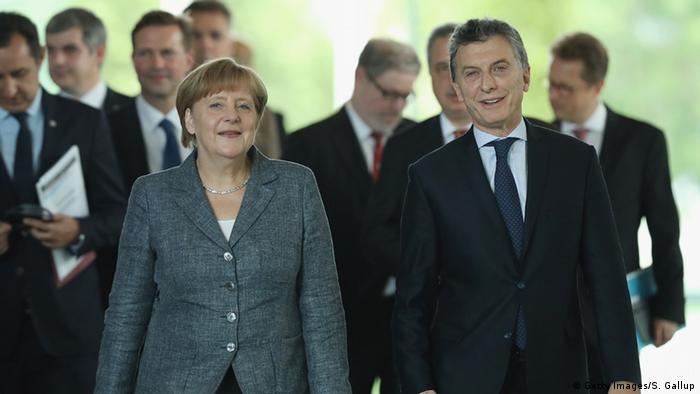 Welcoming the Argentine president in Berlin, Merkel remarked that his country had made promising steps towards normalizing its economy, starting earlier in the year with the settlement of defaulted bonds to the tune of nearly $100 billion (90 billion euros) in the US - which took 15 years of litigation.

Merkel remarked that Argentina was "opening up to the world" once more, adding that austerity measures designed to stabilize the economy would "certainly pay off" in the long run despite affecting those on lower and middle incomes the most. She also announced that Germany was going to contribute to developing the country's energy sector and agriculture.

The issue of agriculture might, however, remain a sticking point. Argentina has been facing staunch opposition from nine EU countries led by France to opening up their farm sectors to European trade. Merkel stressed that the issue of agriculture was the most complicated part of the talks, not just for France, but also for Germany.

"We need a more flexible position from the French side," Macri said during a news conference in Berlin. "I am relying on Germany's leadership capabilities."

He added, however, that there was potential for increasing cooperation in many sectors between the EU and Argentina. President Macri said that Argentina was hoping to become part of a "world agenda" with a series of economic reforms under his conservative leadership.

Free trade between EU and Mecrosur

Both Merkel and Macri also highlighted that despite disagreements on agricultural progress had been made between the EU and the South American trading bloc Mecrosur. Talks between the two blocs on free trade agreements had been put on ice for years.

While Macri stressed that he would welcome further "rapid improvement" in certain areas, such as facilitating bio diesel exports from South America, Merkel said that talks between the EU and Mercosur would still take time to develop further.

"After stagnating for years, we certainly won't be able to come up with a free trade agreement in 14 days. Things will need to take their time," the chancellor explained.