UEFA officials were left red-faced after a "technical problem" in the initial draw for the Champions League last-16 forced them to rule it void. Six-time winners Bayern Munich will now face RB Salzburg. 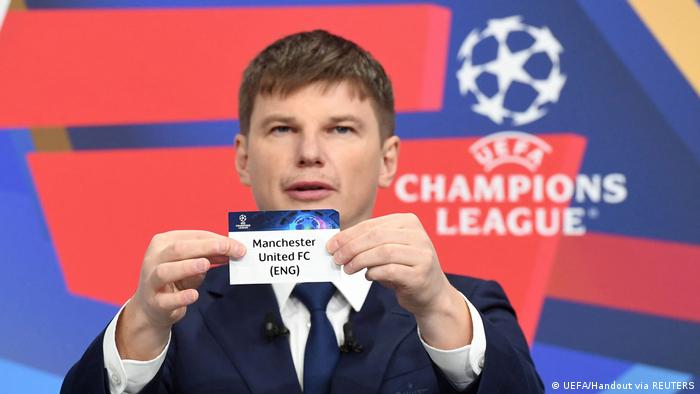 It was bound to happen at some point. On Monday, controversy struck during the draw for the Champions League Round of 16 after UEFA officials were left red-faced by a mistake in the initial draw that forced them to rule it void.

The mistake stemmed from Manchester United being drawn against Villarreal, two sides that had already met in Group F. With group stage opponents not allowed to be drawn against each other until the quarterfinals, UEFA's Giorgio Marchetti spotted the mistake and called for a redraw of the second team. Champions League Final ambassador, Andrey Arshavin, duly obliged, producing Manchester City's name, instead, to face off against Villarreal.

Why did the draw have to be redone?

As a result of the mistake, a technical error then appeared to prevent Manchester United from being an eligible opponent for Atletico Madrid, who were instead pitted against Bayern Munich. UEFA confirmed the mistake following initial suspicion before ruling the draw void.

"Following a technical problem with the software of an external service provider that instructs the officials as to which teams are eligible to play each other, a material error occurred in the draw for the UEFA Champions League Round of 16," read a statement from UEFA.

Six-time Champions League winners Bayern Munich had been drawn against Atletico Madrid, but will now face RB Salzburg in the last 16. The German record titleholders are flying the flag as the Bundesliga's sole representative in Europe's premier club competition after Borussia Dortmund, RB Leipzig and Wolfsburg were all knocked out in the group stages.

Julian Nagelsmann came in targetting "maximum success" in all competitions in his debut campaign as head coach. Bayern have already been knocked out of the German Cup, but breezed through the Champions League group stages with a flawless record of six wins in six, scored 22 times, while conceding just three goals.

Last season, Bayern fell short in the quarterfinals against Paris-Saint Germain and are looking for an improved run this season.

"We respect every opponent, but we don't fear anyone," said sporting director Hasan Salihamidzic on the club's YouTube channel.

The Champions League Round of 16 first legs will be played on February 22 or 23, while the second legs take place on March 8 or 9.

After being knocked out of the Champions League Dortmund and Leipzig dropped into the Europa League Round of 32 draw on Monday, after finishing third in their respective groups.

Featuring in the knockout stages of European competition for a 10th straight season, BVB were pitted against Scottish side Rangers. 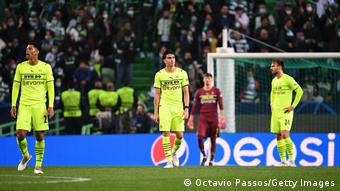 Dortmund crashed out against Sporting in the Champions League

"The Europa League is the only title Borussia Dortmund is still missing," said CEO Hans-Joachim Watzke. "We have to accept our fate and work to win the Europa League."

Leipzig, meanwhile, will go head-to-head with Real Sociedad, who currently sit fifth in La Liga. In the new format of the competition, Bayer Leverkusen and Eintracht Frankfurt received a bye to the Round of 16 after finishing top of their groups. Germany is still yet to produce a title winner since the Europa League's rebranding in 2009.