The match was abandoned after players from the Turkish side claimed that the fourth official used a racial slur against their assistant coach. It is scheduled to restart with a replacement official on Wednesday. 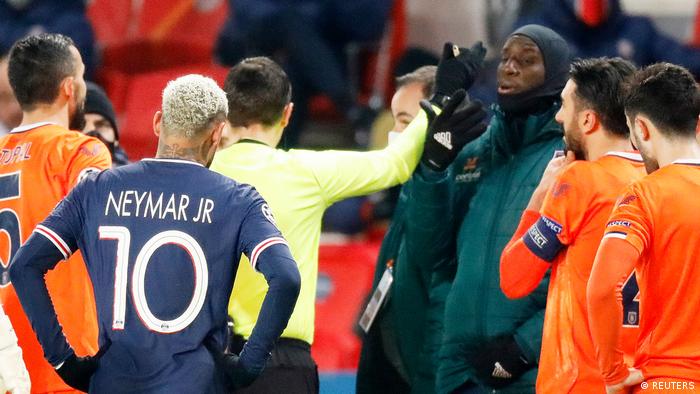 The Champions League fixture between Paris Saint Germain and Istanbul Basaksehir was abandoned Tuesday after players left the pitch over alleged racist slurs by a match official.

"Our assistant coach, Pierre Webo has been sent off with a 'racist' word by the 4th official ref. of the match. Match has stopped for a while," the Turkish club said on its official Twitter feed.

Basaksehir players left the match some 20 minutes into the game, after a long and heated discussion with match officials. The PSG team followed.

The score was 0-0 after 14 minutes when the game was stopped. Basaksehir assistant coach Pierre Webo accused the fourth official, Sebastian Coltescu of Romania, of using a racial term to describe him. It sparked a commotion in the technical area that led to Webo being sent off by the referee.

Coltescu was audible in the empty Parc des Princes stadium as the match was being played behind closed doors because of the coronavirus pandemic.

Television microphones also picked up a furious Webo repeatedly asking the official why the racist term was used to describe him.

Basaksehir substitute Demba Ba came off the bench and demanded an explanation from Coltescu.

Istanbul Basaksehir posted a message on Twitter during the interruption, which was retweeted by the official PSG handle as well.

The incident also sparked a reaction from Turkish President Recep Tayyip Erdogan, who is understood to be closely linked to the owners of the club.

"I strongly condemn the racist remarks made to Pierre Webo, member of the Basaksehir technical staff, and am convinced UEFA will take the necessary measures," Erdogan said on Twitter.

Basaksehir club's president said that the players wouldn't return to the field as long as Coltescu was still there.

Coltescu said he wanted to use his native Romanian to identify the assistant coach. The Romanian word for black is "negru," leaving it unclear which term the official used.

UEFA replaced Coltescu and pledged to investigate the incident. "Following an alleged incident involving the 4th official, the match was temporarily suspended. After consultation with both teams, it was agreed that the match would restart with a different 4th official," the league said in a statement.

"UEFA will thoroughly investigate the matter and further communication will be made in due course."

However, Coltescu would remain in the video control room, which the Turkish club had also opposed.

The match is scheduled to resume on Wednesday.

Erwin Kostedde was the first Black player to represent Germany on soccer's world stage. Nearly half a century on, the pioneering striker tells DW that racism is still a problem on the pitch and in German society.

The former Germany international has apologized for suggesting that Amine Harit and Nabil Bentaleb's heritage could explain alleged attitude issues. The pair are currently suspended by their club, Schalke.

RB Leipzig survived a late Manchester United revival to secure their place in the last 16 of the Champions League. Leipzig's key performer was Angelino, on loan at Leipzig from United's rivals Manchester City.

Bayern make it 15 straight wins in the Champions League

Bayern Munich sealed their spot in the knockout rounds with a routine win over RB Salzburg in Munich. Despite a tricky first half and having a man sent off, Hansi Flick's side found a way to win again.

Disjointed Dortmund ride their luck in Russia to top group

Borussia Dortmund were not at their best but sealed their path in the Champions League as group winners. Axel Witsel was the matchwinner on a night when Youssoufa Moukoko became the competition's youngest ever player.

Julian Nagelsmann's late substitution was a factor in Bayern being dumped out by Villarreal. But years of odd transfers, including overpaying for average players, left him with few options, writes DW's Mark Meadows.