Mohamed Salah and Roberto Firmino scored the goals as Jürgen Klopp got the better of Pep Guardiola again to guide Liverpool into the last four. Guardiola was sent off at half time after remonstrating with the officials. 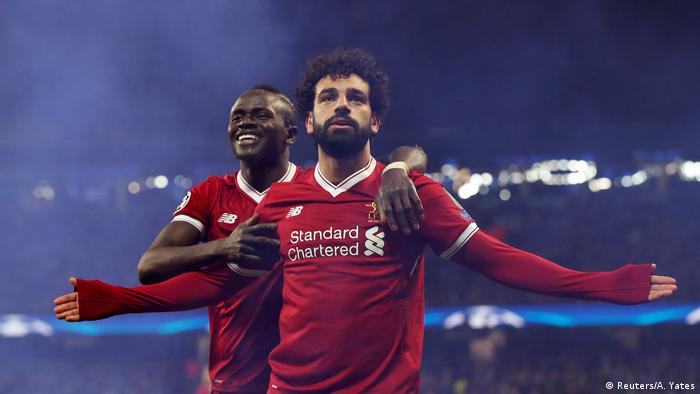 Jürgen Klopp has done it again.

Klopp now has eight wins from 14 games against Pep Guardiola, a record that stretches back to their duels as coaches of Borussia Dortmund and Bayern Munich, respectively. But given the high stakes in this two-legged contest, few victories over his old nemesis will have tasted sweeter than this one for Klopp.

The task was always an uphill one for Manchester City. Having been humbled by an electrifying Liverpool performance six days ago at Anfield, Manchester City went into the second leg with a point to prove and ground to make up.

For all of the success and scintillating football he's brought to the Etihad Stadium this season, Pep Guardiola was heavily criticized for leaving Raheem Sterling out of the starting lineup at Anfield and sacrificed Ilkay Gündogan for the return leg as he reinstated Sterling to the starting 11.

That decision was vindicated inside two minutes. Sterling scampered down the right and rolled a low cross to Gabriel Jesus, who swept the ball in from close range to raise the roof at the Etihad. City were off to the best possible start. Klopp's gameplan was in tatters with some fans still finding their seats. 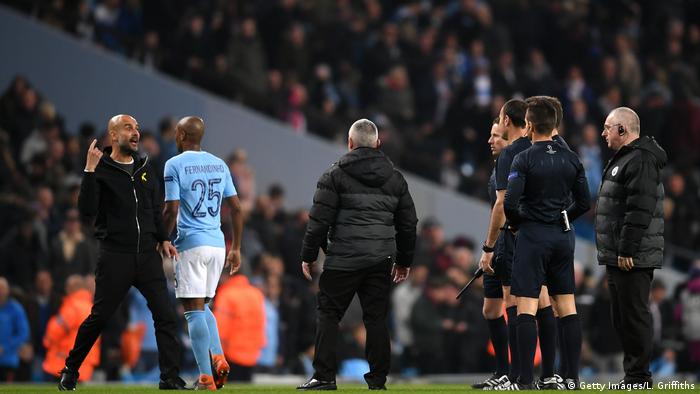 Liverpool's performance at Anfield was free flowing football at its best. The Reds were rewarded for their boldness as an attacking force, but on the ground where they were crushed 5-0 in the Premier League back in September. Here, they struggled to create a single chance, even in the knowledge that a solitary goal would leave City needing five.

Instead, City controlled the game and Bernardo Silva, often on the periphery since his move to Manchester from Monaco, was the thorn in Liverpool's side. In a second half where City were exploiting Liverpool's static defending with increasing ease, the tricky Silva twice went close — the second time he cut inside and saw his deflected shot come back off the post.

But the game's turning point came just before halftime, and it was an incident that would eventually see Guardiola sent to the stands. Germany international Leroy Sané forced the ball home from close range in what should have been City's second, but it was incorrectly flagged offiside, with Liverpool's James Milner having the final touch.

An incensed Guardiola approached the officials at halftime and was subsequently told to watch the second half from the stands. His inability to keep his cool contributed to his team's downfall.

City seemed rudderless without Guardiola directing their game from the technical area. Klopp's Liverpool, meanwhile, sensed an opportunity to pounce and increased the pressure on City. And the Reds didn't have to wait long after the restart to make the breakthrough — and it came from a familiar source.

Sadio Mane darted between Aymeric Laporte and Otamendi before he was smothered by City goalkeeper Ederson, but the loose ball fell invitingly for Mohamed Salah, whose delicate chip over Nicolas Otamendi on the line was enough to leave City needing five goals, a gargantuan task that proved too great for them to conquer. Instead, Roberto Firmino added a second for Liverpool to put the result beyond doubt.

Liverpool left Manchester having knocked out one of the red-hot favorites for the Champions League title. Whoever draws Klopp's side in the last four will not relish the challenge.

Roma are into the semifinals after victory over Barcelona was sealed by hero Kostas Manolas. Roma become only the third side in Champions League history to overturn a deficit of three-plus goals after the first leg. (10.04.2018)

Manchester City's players don't blame their Champions League defeat on the attack on their bus. City boss Pep Guardiola had earlier expressed surprise at the incident, given the bomb attack on Dortmund's bus last year. (05.04.2018)