Borussia Dortmund secure a vital Champions League win in Portugal, while Leverkusen are held by Tottenham. There was also a huge win for Real Madrid, and yet another victory for Leicester. 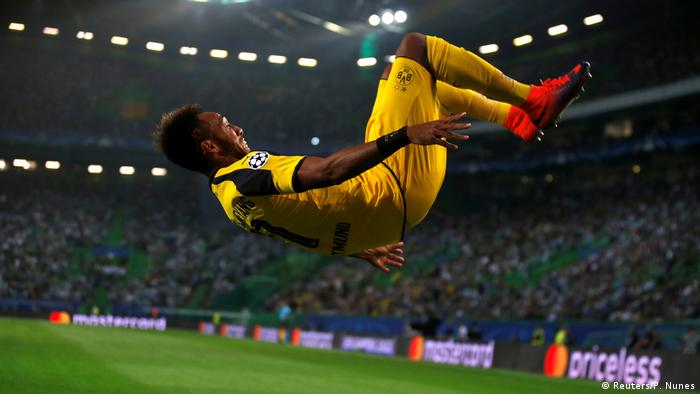 Julian Weigl scored a sublime goal - his first in professional football - as Borussia Dortmund held on for a vital 2-1 win away against Sporting Lisbon.

Dortmund took an early lead through a brilliant finish by Pierre-Emerick Aubameyang, who held off Ruben Semedo's challenge and showed a cool head to lift the ball over the advancing Rui Patricio.

Elias almost drew Sporting level when he held off the challenge of Matthias Ginter to go clean through, but the keeper deflected the ball wide, with Elias slipping as he took the shot.

Then Coates slammed the ball home from close range, but the goal was chalked off after a foul by Sporting striker Bast Dost on Bürki, although replays showed that it was a controversial decision.

Dortmund struck again to put daylight between them and the hosts, and it came courtesy of a wonderful strike by Weigl, whose jinking run and sublime side-footed finish was a great way to score his first professional goal in 103 appearances.

Bruno Cesar pulled one back for Sporting with a goal from a rare indirect free-kick in the box after Bürki picked up Marc Bartra's backpass. But it proved little more than a consolation as Dortmund held on for their second victory in Group F, where they sit ahead of Real Madrid on goal difference.

Dortmund might have won, but with Barta, Ginter and Felix Passlack all suffering minor injuries, Thomas Tuchel's options remain limited.

Tottenham goalkeeper Hugo Lloris pulled off a string of fine saves to deny Bayer Leverkusen on a rainy night at the BayArena.

With Monaco threatening to run away with Group E, Leverkusen and Spurs could be left to fight it out for second spot – and both sides had their chances to take the win.

Tottenham striker Vincent Janssen has endured a torrid start to his Spurs career, and should have scored when he sent a header against the crossbar, with Erik Lamela’s rebound effort deflected over.

But the second half was all about Leverkusen, who threw everything at Spurs. France captain Lloris - who made a stunning save from Javier Hernandez to keep the ball from crossing the line - had one of his finest displays and left Leverkusen frustrated.

Lloris made another save to deny Charles Aranguiz from a long-range free kick and Danny Rose had to make a vital block to deny Hernandez again. Spurs were lucky to escape a penalty when the ball appeared to strike Rose on the arm, rounding off an unsatisfactory and ultimately hugely frustrating night for Leverkusen.

This result adds further significance to these sides’ next meeting at Wembley Stadium on November 2.