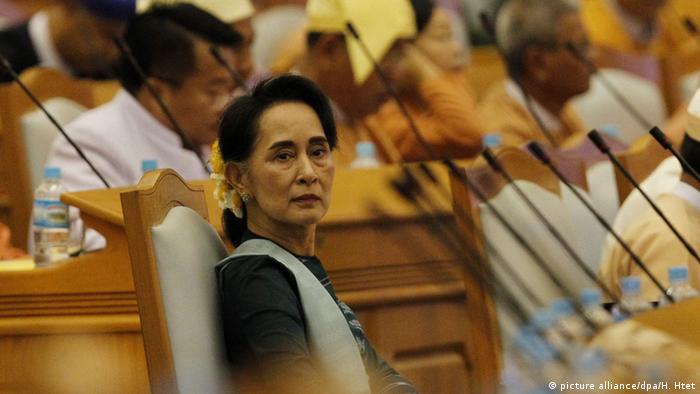 Aung San Suu Kyi, the head of Myanmar's National League for Democracy (NLD) party and the de facto leader of its new government, had pledged justice for activists jailed by the country's previous military-led regime. And on Sunday, April 10, officials announced the release of scores of political prisoners, as well as plans to pardon 100 more.

Releasing political prisoners is a personal matter for Suu Kyi and her party. Many of the jailed were NLD supporters. Suu Kyi herself was put under house arrest several times under the junta. It was therefore one of the clearest steps to take for the new government, which scored a landslide victory in elections last November, following a half-century of military rule. But it won't always be so easy.

Though the previous government initiated a number of reforms - including those that set the stage for last year's democratic elections - harmful remnants from the past might be hard to shake. 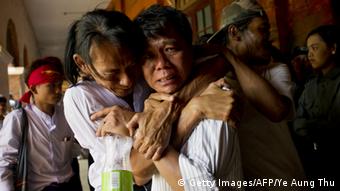 A political protester is reunited with a family member

Simply placing Suu Kyi in a position of power was an ordeal, despite her immense popularity. The constitution bars her from the post of president for having family members with foreign citizenship, leading the NLD to create for her a special state counselor post. President Htin Kyaw is widely viewed as her proxy.

Though there will be more difficult challenges to come, the expectations remain high for Suu Kyi and her party, which rose to power on promises of social, political and economic change.

Jasmin Lorch, an expert on Myanmar at the Hamburg-based GIGA Institute of Asian Studies, views the new government's pledge to tackle corruption as a "very important first step." Corruption is "endemic" in Myanmar, Lorch told DW, adding that the country's economy was "characterized by crony capitalism."

But implementing measures to dismantle this system could prove difficult. Though the military lost big in the ballot boxes, it "continues to hold significant economic influence," with the power still to broker economic deals.

The previous government though had already taken "a number of critical steps for economic reforms," Yasuhisa Ojima, a resident representative in Myanmar with the International Monetary Fund (IMF), told DW.

Exchange rates have been unified, a central bank has been established as a legal independent entity, financial law has been enacted, and progress in modernizing the tax system and public finance management has been made.

Myanmar's parliament has approved a new post for Aung San Suu Kyi. Banned by the constitution from becoming president as her children hold foreign citizenship, her new role is similar to that of a prime minister. (05.04.2016)

For the first time in decades, Myanmar is governed by an elected civilian government. Suu Kyi's National League for Democracy is determined to change the political culture of the country, but it won't be easy. (30.03.2016)

Ojima hopes that the new government will "build on these gains," continuing with structural reforms by planning and managing economic programs.

Peter Brimble, the deputy country director with the Asian Development Bank (ADB) in Myanmar, agrees. According to ADB calculations, Myanmar's annual GDP growth has steadily increased from 5.6 percent in 2011 to an average of over eight percent since 2013.

Brimble added that the country "needs to maintain macroeconomic and fiscal stability to be able to grow in sustainable fashion and to have a cushion against unexpected economic shocks."

Economic progress will also have to take place on the ground throughout Myanmar, where only 40 percent of the road network is paved and 30 percent of the population has access to electricity. This situation "hinders access to markets and social services, and compromises the business environment," Brimble said.

Ojimia views a "strong expansion of public expenditure" as probable, which could help build up the country's infrastructure.

The new government also hopes to ameliorate the situation with the armed ethnic minorities in control of swaths of Myanmar.

A resolution to this matter would yield progress in a number of areas. Brimble noted that the sectarian conflicts were "inextricably" linked to poverty. Areas under control by militants are often rich in natural resources.

The NLD party has "not publicized a clear and detailed program for the future of the peace process," she added, a necessary step that would need to be soon addressed for true progress to occur in Myanmar.