Chad's parliament has voted overwhelmingly to begin withdrawing the country's 2,250 troops from Mali. Soldiers from Chad have played an instrumental role in rooting out Islamists in Mali's mountainous northern region. 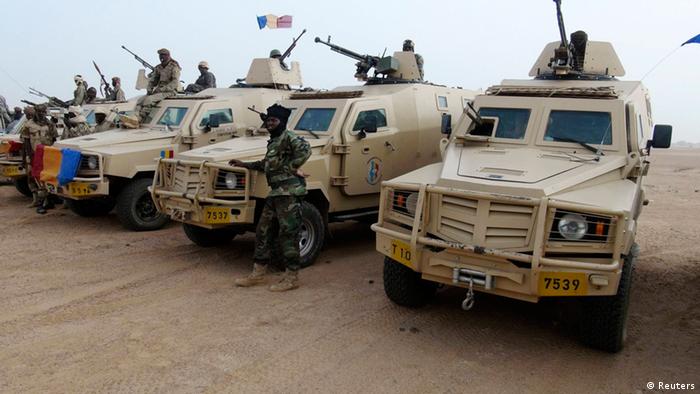 Chadian President Idriss Deby told French journalists on Monday that he had already begun withdrawing an army battalion from embattled Mali, saying that his country's troops were not trained to wage a guerrilla war in Mali's mountainous north.

"Chad's army has no ability to face the kind of guerrilla fighting that is emerging in northern Mali," Deby said in an interview jointly conducted by France's Le Monde newspaper, TV5 Monde and Radio France Internationale (RFI).

One year after the coup in Mali, coup leader Captain Amadou Haya Sanogo has a positive view of the country’s progress. He told DW he is not planning to run for the presidency in elections planned for July 2013. (21.03.2013)

"Our soldiers are going to return to Chad," the president added. "They have accomplished their mission."

But Deby went on to say that Chad would contribute troops to a UN peacekeeping force, which is supposed to replace the French-led military coalition in Mali.

Chad has played an important role in helping French troops root out Islamist militants from their redoubts in the Adrar des Ifoghas mountains. France intervened in Mali last January, halting an Islamist advance toward the capital Bamako and subsequently driving them from northern Mali's major cities.

Chad has claimed responsibility for the deaths of two top Islamist militant commanders in northern Mali. France has confirmed the death of Abou Zeid, a top commander of al Qaeda in the Islamic Maghreb (AQIM).

But Paris has not been able to confirm Chadian claims that its troops killed Moktar Belmoktar, another top Islamist commander. Belmoktar is responsible for the siege of the In Amenas gas plant in Algeria last January, which left scores of foreign oil workers dead.

"We have proof that he is dead, but we could not film it because he blew himself up," Deby said. "We would not have wanted to distribute images like that. But we know that people who were taken prisoner identified him."

Pockets of resistance remain in Mali, particularly in the region around the city of Gao. Suicide bombings and ambushes have become increasingly common. At least three Chadian soldiers were killed in a suicide blast in Kidal, north of Gao, last Friday.

"We paid a heavy price for this mission," Chad's prime minister, Dadnadji Djimrangar, told parliament during its session on Monday.

At least 36 Chadian troops have been killed in Mali and another 75 wounded. Chad has spent some 57 billion CFA francs (87 million euros, $114 million) on its military campaign in the West African nation.