One year after the coup in Mali, coup leader Captain Amadou Haya Sanogo has a positive view of the country’s progress. He told DW he is not planning to run for the presidency in elections planned for July 2013. 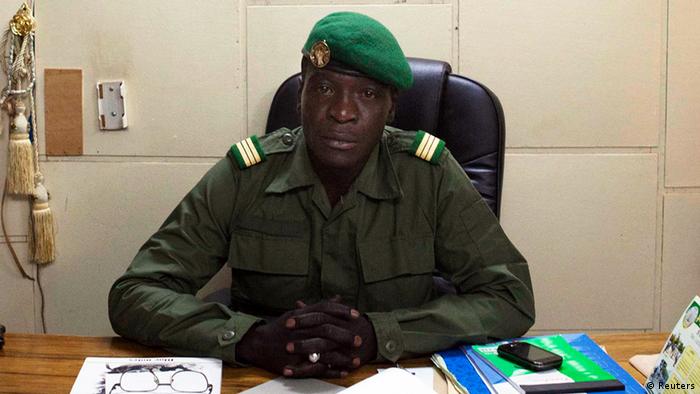 DW: A year ago you headed a military coup against the Malian government. Why?

Amadou Haya Sanogo: We had an ideal and that was first of all to recapture enemy-occupied territory, then to send professionally trained security personnel to re-establish order there and guarantee safety for the Malian people. And finally, to provide a new impetus in a country where the economy, the justice system and the education system simply weren't working anymore. Nothing was working anymore; there was looting, fraud and social deterioration. And so we wanted to give the people new hope, so that things could move forward again.

How do you see developments today, one year later?

I believe that now, one year later, things are slowly falling into place. And they are doing so in the way we had hoped. Of course not everything can be done immediately. A state that has been broken for the last 20 years cannot be rebuilt in a single year. That's logical. But we should remember that the occupied territory is only now being retaken. The current political system is working well. And what is more, the Malian people are beginning to understand what went wrong and to realise that this is the chance to start over.

What is your role now? You have been asked repeatedly to leave the political stage. How do you want to influence future developments?

As a citizen of this country, its welfare is close to my heart. I dream of nothing else. We are independent, we aren't living according to anyone else's narrative. If things go wrong, this has to be acknowledged. You can't hide behind a newspaper or sit back with your cup of tea to avoid facing up to the truth. That is the drama of the situation. Regarding external criticism and talk about my stepping down, I think that such considerations are slowing progress.

Will you be a candidate in the elections planned for July in order to pursue the ideas you said were the driving force behind your coup in March 2012?

I won't be a candidate in the coming elections. That much is clear.

Captain Amadou Haya Sanogo led a rebellion by Malian soldiers on March 21, 2012 which toppled the government and installed a military regime in the country. In April 2012 Sanogo bowed to pressure from neighboring countries and ceded power to the president of the National Assembly, Dioncounda Traore.

Mali one year after the coup

A year ago, Mali experienced a coup. Then Islamist rebels overran the north of the country. In January 2013 French troops intervened. What does the future hold for the West African state after 12 turbulent months? (20.03.2013)

Two rebels groups who seized control of northern Mali have agreed to turn their territory into an independent Islamist state. Both groups have grown in power in recent months, capitalizing on political instablity. (27.05.2012)

Malians take to the street in support of military coup

Thousands of Malians have taken to the streets to show their support for an internationally criticized coup. Ousted President Amadou Toumani Toure has joined African nations in calling for a swift solution to the crisis. (29.03.2012)