Armed rebel groups have agreed to an "immediate" nationwide ceasefire in exchange for political representation. Sectarian violence has plagued the African country since Muslim militias overthrew the government in 2013.

The Central African government and several armed rebel groups on Monday signed a Vatican-backed peace accord in Rome aimed at ending years of violence in the African country.

"We commit to the immediate implementation by political-military groups of a country-wide ceasefire, to be monitored by the international community, as a fundamental step on the way to definitive peace," read the peace deal.

Since 2013, sectarian violence has plagued the Central African Republic since 2013, when an alliance of Muslim-majority rebel groups known as the Seleka overthrew President Francois Bozize.

The ouster triggered a reprisal attacks from "anti-Balaka" militias comprising Christian and animist groups. While efforts to stabilize the country have tempered violence, fighting has flared in recent months.

In May, violence between armed groups left roughly 300 people dead and 100,000 others displaced, marking the worst flare-up since the overthrow of the government. The UN has warned of an unfolding humanitarian disaster, with half the population of 4.5 million requiring assistance. 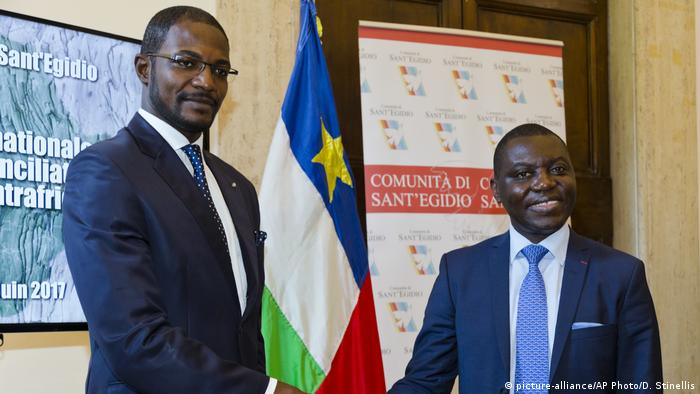 Under the peace deal, the signatories committed to "restoring the (authority of the) state across the national territory" in exchange for representation in the country's political processes.

"The government undertakes to ensure military groups are represented at all levels," the agreement read. It also recognized the armed groups "as part of the reconstruction efforts" aimed at stabilizing the country.

Read more: Opinion: Africa and the specter of pluralism

Parfait Onanga-Anyanga, head of the UN mission in the Central African Republic MINUSCA, said he welcomes this "important step forward for peace."

"The priority is the immediate cessation of hostilities to end the civilian suffering of the population," the MINUSCA chief said, according to the mission's official Twitter account.

Marco Impagliazzo, president of the Catholic peace group Sant'Egidio that negotiated the accord, described it as "an historic agreement, a deal full of hope." The Vatican-backed group is known for having played a key role in secret meetings in Rome to negotiate the end of Mozambique's civil war in 1992.