Monks in the Middle Ages created strong beer to keep them going during fasting periods - a tradition that's celebrated at Munich's Starkbierfest over the next weeks. Here's a tour of the world's strongest beers.

Several strong beers that are celebrated in Munich during the Starkbierfest, or Strong Beer Festival, were initially created by monks. The "Salvator," which is Latin for Savior, is a doppelbock beer that has been brewed by Paulaner friars since 1629. Their brewery became known as the Paulaner.

Interestingly enough, the doppelbock, or double bock, was developed to keep monks going during fasting periods. Nowadays, some people choose to avoid alcohol during the 40 days of the traditional Christian fasting period, from Ash Wednesday to Easter - but these monks followed other rules.

For Paulaner monks in the Middle Ages, that period could extend to up to 130 days. They not only avoided meat, milk, butter and eggs, but all forms of solid foods were also forbidden during the day. However, the Church determined that "Liquida non frangunt jejuneum" - liquids didn't break the fast.

That's why the friars decided to create a strong, substantial beer to serve as "liquid bread" during the day.

To make sure everything was approved by the Pope, they had a sample of their beer sent to Rome. But, repeatedly tumbled along the mountainous way through the Alps, the beer was ruined by the time it reached the head of the Church. The pontiff's reaction: If monks want to drink something that disgusting, they should feel free to do so. 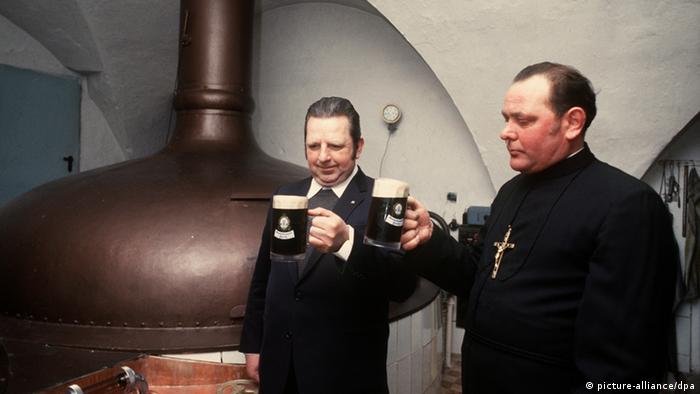 Beer tasting in the brewery of a Bavarian monastery

With 7.7 percent alcohol by volume (ABV), this "liquid bread" probably had an interesting impact on an empty stomach, however.

The Paulaner Salvator is still brewed according to the monks' traditional methods. Following this tradition as well, most doppelbock beers add "-ator" to their name, such as the Augustiner Maximator, the Ayinger Celebrator or the Hacker Pschorr Animator. There are now around 200 "-ator" doppelbock beers registered in Germany.

Munich celebrates its strong beer tradition every spring with its Starkbierfest, or Strong Beer Festival, held this year from March 10 to April 2. Like Oktoberfest, each brewery holds a beer tent where their freshly brewed Starkbier is served. However, unlike the better-known Bavarian beer festival held in the fall, this one is not an all-day party: Tents open towards 6 p.m. and close by midnight.

All beers must be brewed in the Munich region, which is not the case for the world's strongest beers presented in the gallery above. The beers served in Munich's traditional festival are also somewhat more reasonable in their alcohol content, which ranges from seven to nine percent.

Oktoberfest is more than beer, lederhosen and dirndls. A new photographer book by Rainer Viertlböck reveals a unique perspective on the world's most famous festival - from empty beer tents to intoxicated guests. (19.09.2016)

Boasting a rich history and endless diversity, Belgian beer has been added to UNESCO's "intangible heritage" list. The UN body praised the country for fostering a unified identity despite being linguistically divided. (30.11.2016)

5 things you should know before going to Oktoberfest

From dress codes to beer types and even a unique language, there are a few rules to observe at the Wiesn. We explain why the Oktoberfest starts in September and why you should exercise caution when drinking the beer. (23.09.2016)