A fragile ceasefire in some parts of Syria has come into effect as of midnight Friday. The most concerted diplomatic effort so far comes as the UN announced more peace talks to start on March 7. 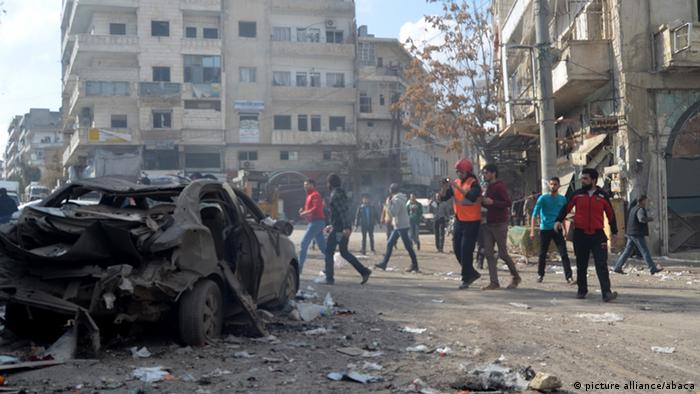 The ceasefire arrangement agreed by Russia and the US came into force at midnight (22:00 UTC) across some parts of Syria. A special task force is to meet in Geneva on Saturday to evaluate how the ceasefire is holding.

A meeting of the United Nations Security Council on Friday night in New York unanimously passed a Russian-US resolution calling on all parties to the Syria conflict to comply with the terms of the cessation of hostilities. It also demanded that humanitarian convoys be given free and unfettered access.

UN Special Envoy for Syria, Staffan de Mistura, said: "Saturday will be critical," and he added: "No doubt, there will be no shortage of attempts to undermine this process."

Large areas of the country are excluded from the truce, according to maps issued by the US and US. Russia insists that the Syrian government and Russian air force should be able to continue their airstrikes against the so-called 'Islamic State' fighters and against al-Nusra, the Syrian wing of al-Qaeda. Its forces continued to strike targets on Friday, hours ahead of the ceasefire.

The head of al-Nusra Front, Mohammad al-Jolani, was reported to be urging opponents of Assad to reject a ceasefire: "Beware of this trick from the west and America because everyone is pushing you to go back under the thumb of the oppressive regime," and added: "Fighters in Syria, willingly arm yourselves, intensify your attacks and have no fear of their troops and their aircraft."

De Mistura briefed the UN Security Council on Friday night via videoconference from Geneva following a meeting of envoys from the 17-member International Syria Support Group, which is supposed to monitor implementation of the agreement.

"This will remain a complicated, painstaking process," he told the Council. But he added that "nothing is impossible, especially at this moment."

The special envoy plans to resume peace talks on March 7 if the cessation of hostilities "largely holds."

De Mistura said a task force created by the 17-nation International Syria Support Group would "monitor and check" what has been happening on the ground. It would examine "any incidents that might have been taking place and what... needs to be done in order to contain them."

'World will be watching,' Obama warns Russia ahead of Syria ceasefire

Hours before a partial ceasefire is due to be implemented in Syria US President Barack Obama has warned Russia and Damascus that the "world will be watching." There are looming doubts over the success of the truce. (26.02.2016)

The UN's Syria envoy, Staffan de Mistura, has said the country faces an important day as the deadline for a ceasefire looms. The deal marks the biggest diplomatic attempt to end the nation's five-year conflict. (25.02.2016)