The play features a hijab-clad woman being raped by Jesus after pulling a national flag from her genitals. The Catholic Church says it was inundated with complaints from its disgusted members. 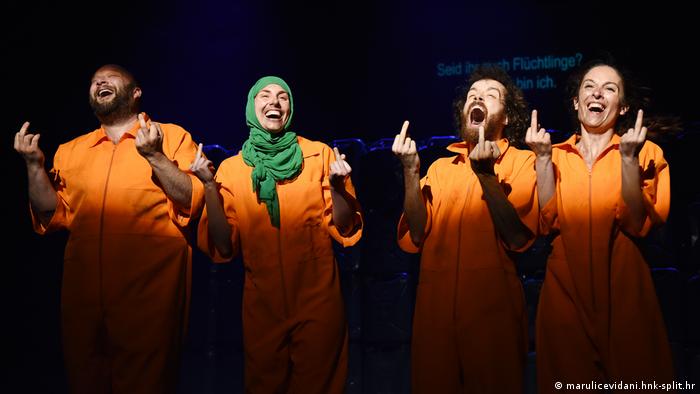 Some 4,000 Jews remained in Germany after the Holocaust. A new movie depicts their paradoxical situation through humor.

German theater gives Trump a taste of his own medicine

The US president is known for his 140-character rants. Now a theater in Germany is taking on Donald Trump with a similar show of provocation. Spoiler alert: The White House falls apart at the end. (14.03.2017)

A theater festival in the coastal city of Split was due to host a performance on Monday of Croatian playwright Oliver Frljic's "Our Violence and Your Violence," but the region's Archdiocese called for its cancellation.

The play discusses Europe's refugee crisis and was already staged in Croatia and other European countries.

In one scene Jesus rapes a Muslim woman wearing a hijab. Earlier in the play, a naked actress wearing a hijab pulls out a national flag from her vagina.

"We urge all those responsible ... to take steps that [the play] does not offend people and humiliate culture," the regional Archdiocese of Split said in a statement.

The play "offends God, man and nation," the Archdiocese said, adding it had "already provoked local and international condemnation."

The statement was addressed to the Ministry of Culture, Split authorities and the town's national theater, where the play was to be staged.

The Split-Makarska Archdiocese said it was inundated with complaints from its disgusted members.

Marulic Days Festival is named after Croatian Renaissance poet Marko Marulic, a humanist writer whose work was heavily influenced by the Bible. The Archdiocese said hosting such a play at a festival in his honor was an insult to his memory.

A Croatian ultraconservative party announced a protest in front of the theater on Monday, saying it "offended in the most brutal way the religious and moral feelings of Christians, Muslims and other Croatian citizens."

On Friday, one of Frljic's other plays, "The Curse," drew protests in the Polish city of Warsaw. Polish police dislodged Catholic protestors from the entrance of a theater. The play featured scenes that depicted oral sex being performed on a statue of the late Polish Pope John Paul II. The statue later had a sign hung around its neck labeling him a protector of pedophiles.

The Polish Powszechny theater said in a statement that "the show gives the floor to various ideological positions and must be analyzed as an integral artistic work and not a set of scenes apart, unrelated."

Poland's conservative Law and Justice party in 2016 slammed a Polish production of "Our Violence and Your Violence," saying it contained "pornography and blasphemy."

About 90 percent of Croatia's 4.2 million citizens identify as Roman Catholic, according to the 2011 census.