Harvard-educated lawyer Pere Aragones pledged to keep pushing for an independent Catalonia, pointing to Scotland's 2014 referendum approved by the UK as a positive example. 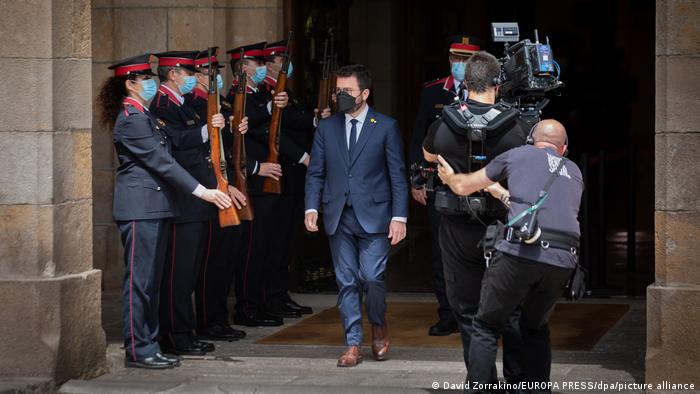 Aragones was born into a wealthy family, but joined a leftist party as a teenager

The 38-year-old lawyer called for "immediately" restarting independence talks with Madrid, which have been suspended due to the pandemic. At the same time, he signaled a more moderate course than his predecessors.

The London-approved independence vote ended with Scotland choosing to stay in the United Kingdom, although calls for another referendum have since grown louder, primarily because of Brexit.

Who is Pere Aragones?

The new Catalan president comes from a family of industrialists and hotel owners. He joined the Republican Left of Catalonia (ERC) party as a teenager and became a regional lawmaker at the age of 24, moving into government six years ago. Aragones also completed a part of his education at Harvard University.

He is the most senior ERC leader who is not in jail over the region's unilateral independence bid in 2017. On Monday, Aragones called for amnesty for Catalan leaders who have been jailed or exiled over the dispute.

However, the new Catalan president said he would not reassert the independence claim until there was more support among the voters. The wealthy region of over 7.5 million people remains almost equally split on the issue in opinion polls. The ERC placed second behind a pro-union Socialist party in the February election, but separatist groups combined still managed to secure an overall majority.

How did Madrid react?

The Spanish government, led by Pedro Sanchez, remains firmly opposed to both the referendum and the amnesty for separatist leaders. On Friday, Sanchez congratulated Aragones and pledged to work together reconciliation between Catalonia and the rest of Spain.

Paz Esteban was replaced after a controversy over the use of the Pegasus spyware to hack top Spanish officials' cellphones, as well as spying on Catalan separatists.

Catalans march for independence ahead of Madrid talks 11.09.2021