Hundreds of thousands of Catalans have packed the streets of Barcelona to demand the right to vote on a split from Spain. Their campaign has been emboldened by Scotland's upcoming independence referendum. 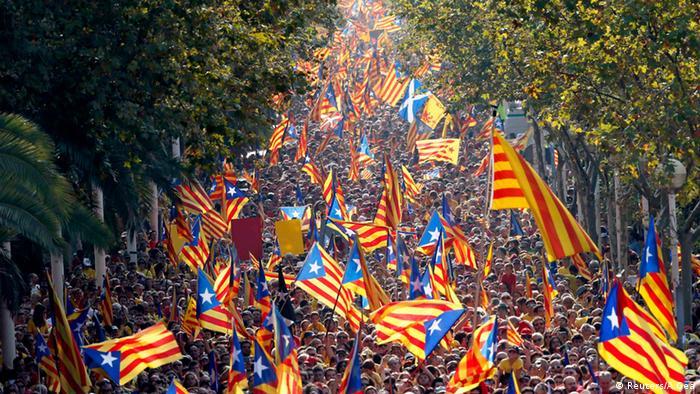 Catalan separatists massed in Barcelona's streets in red and yellow shirts Thursday, forming a giant "V" to demand a vote on breaking away from Spain.

The flag-waving demonstration also marked Catalonia's national day, the Diada, which commemorates the Spanish conquest of Catalonia in 1714. The call for a referendum was even more sensitive this year as it comes amid calls for a November 9 vote on Catalan independence.

Catalonia's regional president Artur Mas has, however, vowed to push on with the plan by passing a regional law that he says will allow him to hold a "consultation" vote, but his efforts risk being thwarted by Spain's Constitutional Court.

Spain's national government, which fiercely opposes a referendum, has branded the November vote as illegal and vowed to block it.

Some protestors on Thursday were also waving blue and white Scottish flags as Catalonia's campaign has drawn momentum from the upcoming referendum on whether Scotland should split from the United Kingdom. Polls have suggested that the vote on September 18 is too close to call.

Catalonia is a wealthy region of 7.5 million inhabitants with its own language and culture. Like other Spanish regions, it has a large degree of autonomy.