Cash payments on their way out in Denmark | Business | Economy and finance news from a German perspective | DW | 22.12.2015

Cash payments on their way out in Denmark

Cash-free payments are quite common in Denmark. People there use credit cards not only to pay for big-ticket items, but also for small things like hotdogs, and this trend cannot be reversed. 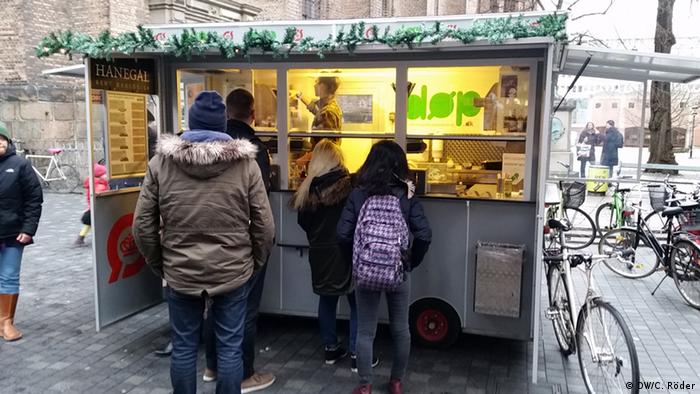 Despite cold and dull weather, people are queuing up in front of a hotdog vendor in Copenhagen's old city center. Hotdogs served with cucumbers and onions are popular among locals and tourists alike. Andreas Sigsgaard has been selling those Danish "Poelser" for a year.

The moment people have placed their orders, he's got a fair idea how they're going to pay. Foreign tourists hand him cash, while Danes get their credit cards ready. Even sums as small as 40 Danish kroner (5 euros, $5.4) for a hotdog are paid via credit card.

Most Danes have to think hard when asked about when they last paid for something in cash. "It's easier with the card," said one woman.

Inconceivable in other nations

Such an extent of cash-free payments is still unthinkable in other nations, including Germany where everyone usually has some cash with them. Many worry their digital transactions could be monitored - for historical reasons, Germans place a high value on privacy and data security. Critics tend to argue that cash-free transactions may be practical, but really they're mostly favored by banks as a way to cut running costs and boost profits.

Most Danes, in contrast, don't seem to be worried about lenders knowing who bought what and when. You simply have to trust them, they say, adding that there are no perfect systems anyway. Hotdogs vendor Andreas Sigsgaard shares their preference for e-payments.

"In the end, when we have to count the register there is less money to count, it's a bit easier, and there's less room to make mistakes, fewer things for me and the other guys to consider when closing down after a long day." 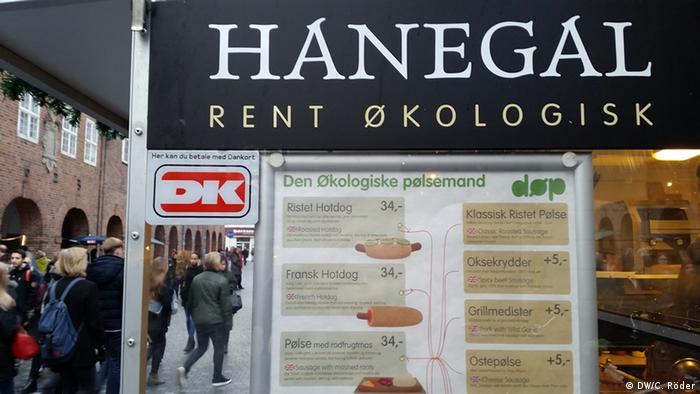 No matter how small the sum you owe, vendors prefer credit card payments in Denmark

Most big retailers are also in favor of digital payments. Take the Danish drug store chain Matas. A couple of months ago, it introduced mobile phone payments in all its stores. You scan the barcode, confirm the sum to be paid, and you're pretty much done. It speeds things up.

"We're interested in getting rid of cash," said Matas IT Director Thomas Grane. "The handling, security and everything else is expensive; so, definitely we want to push digital payments, and that's of course why we introduced mobile payments to help this process."

Danes are willing to play along. About a third of the population has already downloaded the MobilePay app onto their smartphones and uses it actively. With the push of a few buttons, small sums of debt can be settled among friends from smartphone to smartphone. Even at flea markets, private vendors are increasingly paid via MobilePay.

There's no stopping this development. Twenty years ago, 80 percent of Danes paid in cash while shopping; now it's less than 25 percent. Danish shops that don't sell food items may soon get permission to reject coins and banknotes altogether, as is already the case in neighboring Sweden where signs say "Vi hanterer ej kontanter", meaning we don't accept cash. Politicians and central bank officials want the nation to completely do away with cash payment by 2030.

Denmark has not progressed that far yet. Danmarks Nationalbank Governor Hugo Frey Jensen doesn't think it's a good idea to set a concrete date for stopping cash payments altogether: "We're obliged to supply the amount of cash the population... and businesses demand," he said. "But on the other hand, we think it's also important to have an efficient and secure payment infrastructure, the whole digitalization process is very important in a country like Denmark."

Hotdogs vendor Andreas Sigsgaard is thinking about accepting smartphone-based payments. But he'll keep a small cash register handy too - for the tourists.