The head of Germany's Roman Catholic Church has said he will refer the case of the scandal-hit Bishop of Limburg to the Pope. The bishop is under fire over a costly renovation and faces penalties for lying under oath. 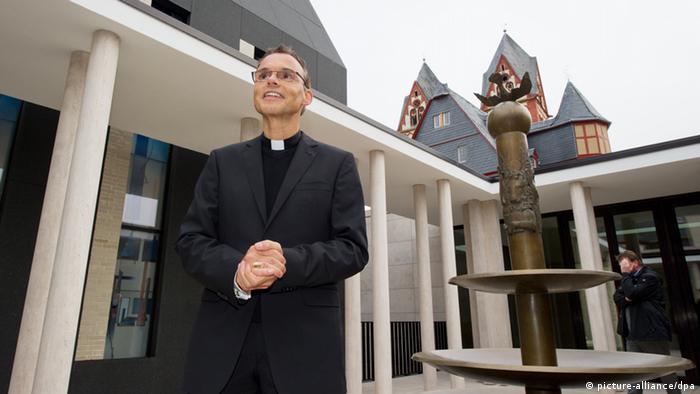 Bishop of Limburg Franz-Peter Tebartz-van Elst faced increased pressure to step down on Thursday after the head of the German Bishops' Conference, Archbishop Robert Zollitsch, announced he was taking his concerns to Pope Francis.

The bishop's name has been plastered across German newspapers all week after his diocese announced revised costs of 31 million euros ($42 million) for his new residence and offices, next door to the celebrated Limburg Cathedral. The predicted figure stood at 5.5 million when construction began in 2010.

'Bishop should wait until smoke clears'

The Bishop of Limburg is under criticism for overspending on his new home and for giving a false legal declaration. Church law expert Stephan Haering says things are bad, but he shouldn't resign yet. (10.10.2013)

Zollitsch told journalists he was "as surprised at the 31 million euro figure as you are," pledging to address the controversy with the pope during a visit to Rome next week.

He said he had set up a special commission to investigate the issue, adding that he was "taking the situation in Limburg very seriously."

The Bishop of Limburg has hitherto offered little comment on the renovation-cost controversy, however opted to break his silence on Thursday in an interview with Germany's mass-circulation Bild newspaper.

"People are taken aback by the number, I understand that," Bishop Tebartz-van Elst told Bild. "But there are ten separate building projects involved. You need to consider lots of details, for instance the regulations governing the preservation of monuments."

Tebartz-van Elst also alluded to a special three-person panel he set up, saying this group had also been monitoring the costs since 2011. Prior to the bishop's interview in Bild, the members of the panel had said they were shocked at the revised figures, accusing Bishop Tebartz-van Elst of keeping them in the dark. Jochen Riebel, a former state cabinet minister in Hesse, was the most outspoken of the trio.

"The only way I can make sense of this for myself is that either the bishop is a very accomplished liar, or that he's somehow in poor health," Riebel told the daily Frankfurter Allgemeine Zeitung on Wednesday.

What will Pope Francis think?

Other critics, including the German reform group "Wir sind Kirche" ("We are Church"), have said the rising costs and limited communication on the matter from Limburg's 53-year-old bishop stood in sharp contrast to Pope Francis' calls for Roman Catholicism to become less lavish and more open. One went so far as to call for the Vatican to remove him from office.

"The bishop will presumably cling to his post, but there's another path here: the Pope could strip him of his office," Thomas Schüller, a church lawyer based in Münster, told the Kölner Stadt-Anzeiger newspaper.

Another objector, German light artist Oliver Bienkowski, on Tuesday projected a caricature of the bishop onto the facade of the cathedral with the German for "Thou shalt not steal" underneath.

The controversy over the spiraling renovation costs is not the only scandal to hit Tebartz-van Elst in recent days. A Hamburg prosecutor requested a penalty order against him on Thursday for having submitted two false affidavits to the Regional Court of Hamburg in September 2012.

The bishop was criticized for taking an alleged first-class flight to India, and has been in a legal dispute with leading news magazine Der Spiegel on the issue. Tebartz-van Elst issued a statement under oath denying he was asked by the Spiegel journalist about the first-class trip, and that he had claimed to have flown business class, forcing Spiegel to print a retraction.

The publication has since said it stands by the story and filed a complaint with public prosecutors in its home city, Hamburg. Both the question and answer were recorded on a mobile-phone video, which were subsequently published by Spiegel.