In his third day of testimony, a Vatican official has denied knowledge of child sex abuse cases in his native Australia. He says he was simultaneously kept in the dark, but also changed the culture of cover-ups. 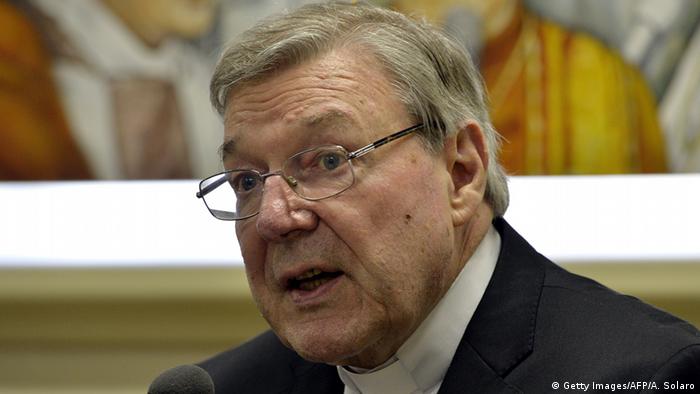 An Australian commission investigating pedophilia allegations involving the Catholic Church and other social organizations challenged Cardinal George Pell, who is the pope's chief financial adviser, over claims he was unaware of at least two cases of serial pedophilia when he was a locally-based clergy.

Speaking via video link from a hotel in Rome, Dell insists church authorities deceived him, not once but twice over child abuse allegations against priests Gerald Ridsdale and Peter Searson.

"Counsel, this was an extraordinary world," Pell said. "A world of crimes and cover-ups and people did not want the status quo to be disturbed."

And he further claimed to have changed a culture of "crimes and cover-ups" within the church in the 1990s.

But members of the Royal Commission into Institutional Responses to Child Sexual Abuse, as well as lawyers for the victims found his claims difficult to believe.

Commission chairman Peter McClellan told Pell that his evidence of a Catholic Education Office cover-up "makes no sense at all."

And Gail Furness, the lead counsel assisting the commission, told Pell the evidence was "completely implausible."

She accused the 74-year-old cleric of denying knowledge about the pedophiles as an explanation for his lack of action.

But Pell remained firm, and added that he was the one who initiated a program in 1996 to pay compensation for clergy abuses.

"I not only disturbed the status quo, but when I became archbishop, I turned the situation right around so that the Melbourne Response procedures were light years ahead of all this obfuscation and prevarication and deception," he said.

Ridsdale is in prison, after being convicted of more than 100 sexual abuse charges against children, which Pell said was a sad story but "not of much interest" to him at the time, comments that stunned abuse victims.

"George Pell has consistently pointed the blame elsewhere, accused everybody of being a liar and deceit. If he is telling the truth, that would make him an extraordinarily ignorant man," said David Ridsdale, who was abused for years by his uncle Gerald Ridsdale.

The church confirmed four cases of child sexual abuse against Searson, who died in 2009, and was known for bizarre behavior. According to one victim, the gun-toting priest forced children to kneel between his legs in the confessional where he kept a tape recorder.

Australia ordered the Royal Commission in 2012 after a decade of growing pressure, to investigate allegations of pedophilia across the country.

It has spoken to almost 5,000 survivors and heard claims of child abuse involving churches, orphanages, community, sports and youth groups and schools.

A London court has sentenced a former Anglican bishop to prison for sexually abusing young men. The presiding judge said the abuse was committed "under the guise of it being part of an austere regime of devotion." (07.10.2015)

Pope meets with victims of clerical sex abuse in Philadelphia

Pope Francis announced that he has met with victims of church sex abuse during his visit to the US. He said that he felt 'deep shame' about the transgressions - and pledged to continue work on investigating the crimes. (27.09.2015)

Jozef Wesolowski, a former archbishop accused of child sex abuse, has been hospitalized hours before a trial against him was set to open at the Vatican. The unprecedented trial is likely to be adjourned to a later date. (11.07.2015)