Venezuelans have again taken to the streets of Caracas. The latest round of protests has called for the release of dozens of activists who have been arrested during three weeks of violent demonstrations. 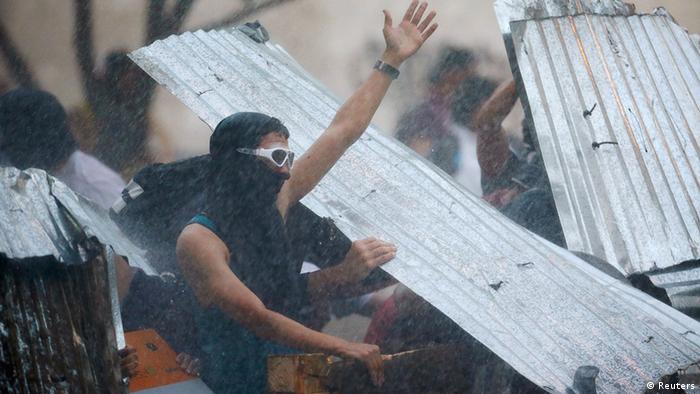 On Saturday, protesters formed a convoy in eastern Caracas after Friday saw battles between security forces and demonstrators. President Nicolas Maduro has labeled the near month of protests a US-backed "coup" attempt.

Argentine President Cristina Fernandez de Kirchner also denounced the "attempted soft coup against the Bolivarian Republic of Venezuela." On Saturday, she told the Argentine parliament that, though she would not defend Maduro or his government, it was necessary to stand by the democratic system "in every country of the region, whether from the left, the right or from behind." She added that "democracy is a matter of peace and life."

Venezuela's press workers union, the SNTP, announced that the foreigners included the US freelance reporter Andrew Rosati, who writes for the Miami Herald newspaper. Authorities detained Rosati for half an hour and struck him "in the face and his abdomen" the SNTP announced on Twitter.

According to Venezuela's chief prosecutor, 17 people have died in clashes between opposition protesters and state security forces since mass demonstrations against President Nicolas Maduro erupted in February. Chief prosecutor Luisa Ortega Diaz said that 261 people had been wounded and 1,044 detained, with 72 people still behind bars.

"The inflammatory rhetoric from all sides is utterly unhelpful and risks escalating the tense situation in the country," UN High Commissioner for Human Rights Navi Pillay said on Friday. "It is time for all sides to move beyond verbal aggression and towards meaningful dialogue. This crisis will only be resolved if the human rights of all Venezuelans are respected."

Meanwhile, protest organizer Alfredo Romero, head of the Venezuelan Penal Forum, said that 33 cases of "cruel and inhumane treatment or torture" have been reported to the public ombudsman. The Venezuelan government announced that it was investigating 27 cases of human rights abuses, but did not provide details.

On Saturday, Venezuela announced that the country's foreign minister would meet UN Secretary-General Ban Ki-moon in Geneva on Tuesday, amid growing international calls for dialogue between political players to ease the OPEC nation's worst unrest in a decade.