One man has died from his injuries and two others were injured after being struck by a car in Heidelberg. The knife-wielding driver was intercepted by a police patrol and shot by an officer following a brief standoff.

A 73-year-old German man died from his injuries after he was run over by a car in a central square in Heidelberg, a city in southwest Germany on Saturday evening. The vehicle rammed into a pedestrian zone, injuring the man fatally and slightly injuring two other people, a 32-year-old Austrian man and a 29-year-old woman from Bosnia-Herzegovina. The driver fled the scene and was shot by police while trying to make his escape. He was seriously injured and brought to a nearby hospital. According to local newspaper "Rhein-Neckar-Zeitung," the man is currently not fit to be questioned. 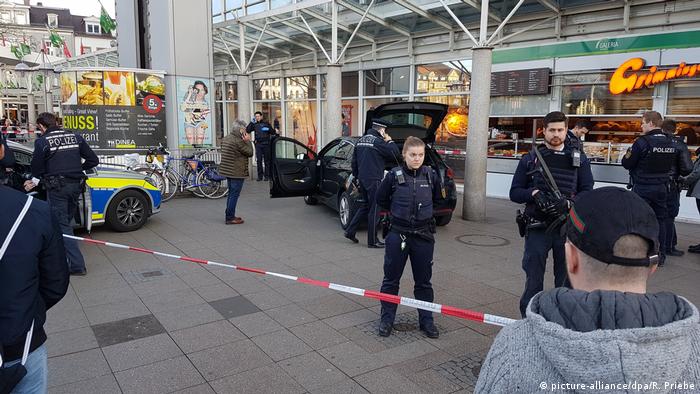 Police identified him as a 35-year old German.

"There are no indications of a terrorist background," police spokesman David Faulhaber told reporters. He said that he could not comment on possible motives for the attack.

On Twitter, the police responded to speculations that the driver was an immigrant, writing: "And again, for everyone: #Suspect: German with NO immigrant background!"

In an interview with broadcaster n-tv, police officer Norbert Schaetzle said that the man was believed to be carrying a knife. Schaetzle did not confirm whether the man was mentally disturbed, but said that that the perpetrator likely acted alone. The vehicle the man used was a rental car. 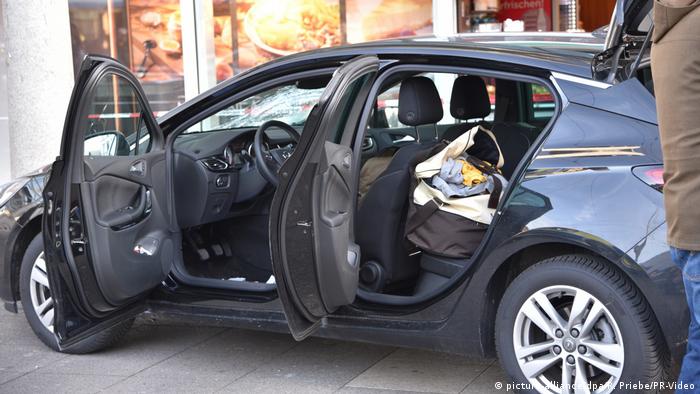 The man fled from his rental car after injuring three people

The "Rhein-Neckar-Zeitung" cited police as saying that the suspect had stopped at a red traffic light, but then accelerated after the light turned green without stopping, leading his car to smash into a group of people.

The site of the initial incident was a square usually buzzing with foot traffic, located near several public transportation stations and at the entrance to a popular shopping district in Heidelberg. The city is primarily known as a university town - about a quarter of its 150,000 residents are students. Heidelberg is home to Germany's oldest university and several reputable research institutions.

Attacks with vehicles are a sensitive topic to many Germans.  The country has been on high alert since a 24-year old man with suspected ties to the so-called "Islamic State" (IS) drove a stolen truck into a crowded Christmas Market in downtown Berlin in December last year, killing 12 people. In July 2016, a similar attack in Nice, France, left 86 people dead. 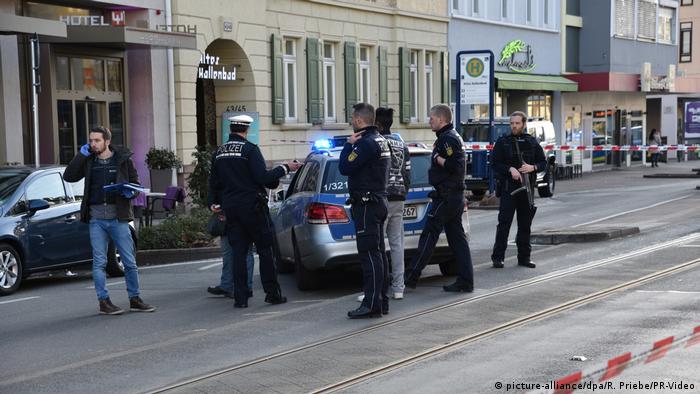 "A man drove into a group of people, three persons hurt, suspect captured and shot," local police wrote on Twitter, using the Hashtag #Bismarckplatz, the name of the square where the man drove the car.

Police also shared a photo of investigators at the crime scene with the caption "our colleagues are investigating."