Canines in Dogman win the Palm Dog at Cannes

A barking prize while waiting for Cannes' Palme d'Or on Saturday: The four-legged cast of Dogman, directed Matteo Garrone of Gomorrah fame, won the Palm Dog, the top award for dogs on screen. 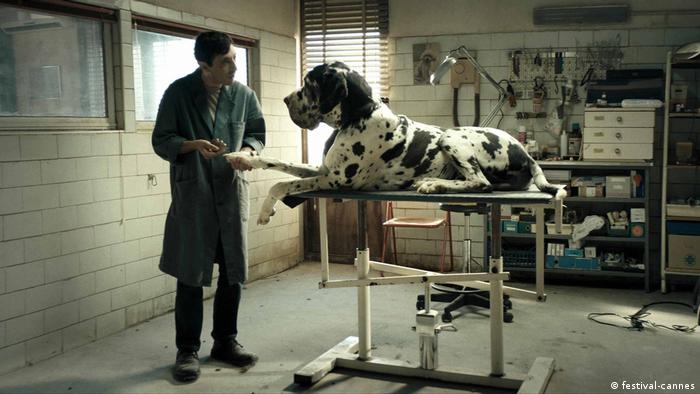 The canine cast of a film about an Italian dog groomer facing tough guys in gritty Naples won the Palm Dog prize at the Cannes film festival on Friday.

Dogman has been been described by The Guardian as a "compelling opera of beta-male criminal martyrdom, inspired by a true case."

It was directed by Matteo Garrone, who also co-wrote the film based on Roberto Saviano's best-selling book, Gomorrah, also a major film.

This work features "far less outright violence" than the previous mafia movie, according to The Hollywood Reporter. But it's "just as intense a viewing experience, one that will have audiences gripping their armrests with its frighteningly real portrayal of a good man tempted by the devil," the film publication added.

Dogman is one of the favorites among the 19 films competing for Cannes' top Palme d'Or prize, awarded on May 19. But another similar-sounding award, the Palm Dog, already recognized the work of the Great Dane and the Chihuahua acting in the film as this year's best performance at the festival by a pooch.

While Marcello Fonte's lead performance as the pooch parlor boss who gets caught up with the criminal underworld was hailed by critics, it's the film's "large cast of dogs that steal the show," argued Palm Dog founder Toby Rose.

In the film, the striker's career is destroyed when hallucinated puppies block him during one of his shots on goal.

Writer Vanessa Davies and her pug were also honored with the Palm Dogmanitarian Award for her forthcoming Disney family comedy named after her pet, Patrick.

"It's a wonderful real life story and a worthy winner for celebrating the bond between canines and humans," Rose said. The film will be released on June 29.

The Palm Dog has been awarded at Cannes since 2001 and is described as "the world's best-known award for dogs on screen."

Past winners include Uggie from the Oscar-winning, The Artist; and Ken Loach for casting a three-legged dog named Shae in his Palme d'Or-winning work, I, Daniel Blake.

Wes Anderson's "Isle of Dogs," a stop-motion adventure featuring the director's ultra-stylized approach, premiered at the Berlinale to strong reviews. Now the political allegory is making its American debut. (23.03.2018)

No Irish. No blacks. No dogs. No Galileo

Stuff business! The Brexit-tinged tussle over the EU's satellite navigation system, Galileo, is all about the technology and the engineering expertise that the UK desperately wants - and needs - to keep. (17.05.2018)