Canada’s party leaders held a debate Thursday night ahead of the September 20 vote. Prime Minister Justin Trudeau called for elections as Kabul fell to the Taliban. Canadian Prime Minister Justin Trudeau faced off against rivals in an English language televised debate on Thursday night after calling snap elections on August 15 in an uncertain bid to reclaim his majority in parliament.

Trudeau has served as prime minister since 2015, but has led a minority government since 2019. His main rival, Conservative Party leader Erin O'Toole, criticized him for the withdrawal from Afghanistan and for calling snap elections during a pandemic.

"You called an election, so you put your own political interests ahead of the well-being of thousands of people. Leadership is about putting others first, not yourself," O'Toole said.

Canada will go head to the ballot box on September 20. While opinion polls place Trudeau's Liberal Party ahead in terms of parliamentary seats, some polling shows the Conservative Party in the lead in terms of the number of votes.

Trudeau hit out at O'Toole, suggesting, "He can't even convince his own candidates to get vaccinated."

O'Toole could not say how many of his candidates had not been vaccinated, while Trudeau stated that all candidates but one in his party received the jab, and that one candidate had a medical exemption.

On an issue like climate change, O'Toole, who ran for his party's leadership by labeling himself a "true blue conservative," said he favors a carbon tax, perhaps in part to win over Liberal Party voters. He conceded that his party had not done enough to combat greenhouse gas emissions and that he must work to earn back voters' trust on the issue.

O'Toole has moderated his views since his selection as Conservative Party leader. Likewise, O'Toole described himself as "personally pro-choice" on the question of abortion.

"I am driving the bus to make sure we get this country back on track. And I'm here to defend the rights of all Canadians, women, members of the LGBTQ community," O'Toole said.

Trudeau, the second-youngest prime minister in Canadian history and the son of the late Liberal Prime Minister Pierre Trudeau, appeared agitated at times on stage with his four main rivals.

O'Toole presents the biggest direct threat to him. Trudeau accused O'Toole of harboring an extremist agenda and not being tough on issues like climate change.

Trudeau, who is keen to win back a majority in parliament by calling elections two years early, also accused O'Toole of nebulous politics.

For his part, O'Toole said that Trudeau's government was weak and ineffective, and that he believed vaccine mandates went too far. Despite that, he insisted he could keep more hard-line elements in his party under control.

Nik Nanos of Nanos Research, a polling firm, told Reuters by email: "There were no major gaffes, nor any knockout punches from any of the parties."

"This wasn't a game-changer," he surmised. 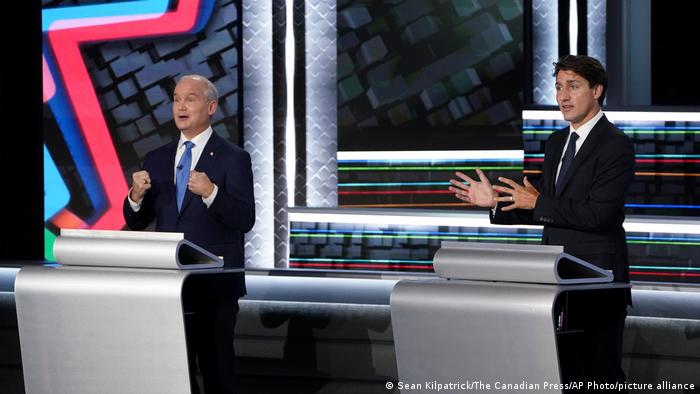 O'Toole, left, and Trudeau, right — the latter appeared agitated at some points in the debate