Violence is escalating in Cameroon, where an aspiring priest has been shot dead by soldiers in front of his church and the archbishop is demanding an end to the violence. Adrian Kriesch reports from Bamenda. 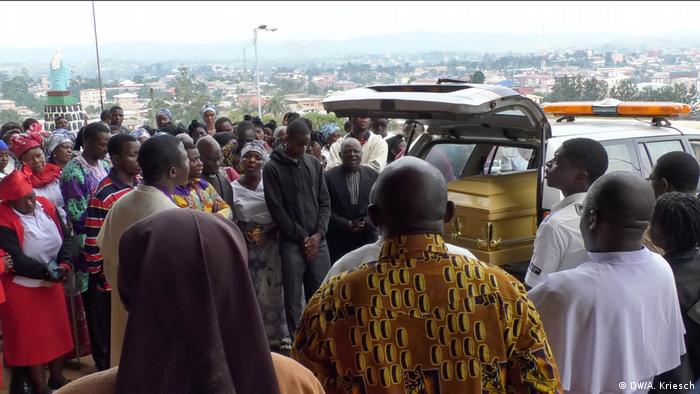 Comfort Akiata can hardly stand on her feet for pain as she approaches her son. Gerard Akiata is wearing a white robe, a chain with a cross on his stomach. He is lying in an open coffin in the Bamenda cathedral. "Good journey, my son," says the mother, bursting into tears.

The 19-year-old always wanted to become a priest, Comfort Akiata later explains. "The way he died — I am just confused. I don't even know what I can say. He was my only boy." According to eyewitnesses, Gerard was shot dead after a service in front of his church near the provincial capital of Bamenda. The Archbishop of Bamenda reported that several nurses in a neighboring clinic observed the situation. 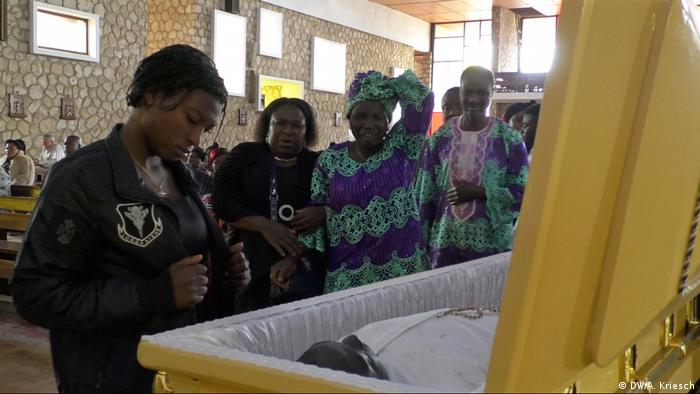 Comfort Akiata mourns the loss of her only son

According to the nurses, a military vehicle stopped in front of the church and bystanders fled in panic. Gerard hid at the entrance but was found shortly afterwards. According to eyewitnesses, a soldier spoke briefly to him, ordered him to lie down and shot him. Archbishop Cornelius Fontem Esua responded with surprisingly clear words: "The army is a symbol of torture, of death," he said. "Because wherever they go, they don't investigate issues. They start arresting, torturing, burning houses. That is done by the army, not by the Amba-Boys."

By Amba-Boys, the archbishop means separatists who are fighting for the independence of their own state, Ambazonia. The conflict's roots go back to when the state was founded in the 1960s. At that time, French- and English-speaking-mandated territories became the independent Cameroon. Officially, there have since been two official languages, two educational systems and two legal systems. In reality, however, the minority in the Anglophone West of Cameroon has felt oppressed and disadvantaged for years.

At the beginning of 2016, lawyers took to the streets, later teachers and members of civil society. The state reacted with an iron fist — at least six people died, dozens were arrested and the government imposed a three-month internet blockade on the entire region. Several armed resistance groups were formed as a result. They have since been fighting, with hunting rifles and machetes, against the Cameroonian military, some of which was trained by American and Israeli special forces. According to Amnesty International, 400 civilians lost their lives this year alone. Both warring parties have been accused of human rights violations. 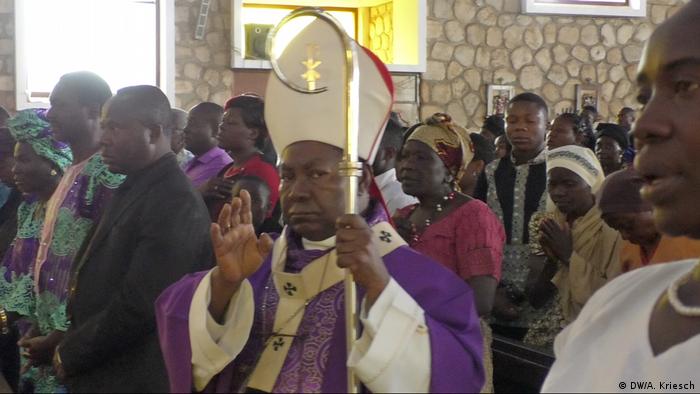 Fear and terror now dominate everyday life in the former economic metropolis of Bamenda, the country's third-largest city. Soldiers patrol the streets, often demanding bribes from local residents at checkpoints. For days a corpse has been lying on the street, a separatist killed by the military. No one dares to bury it, residents say, for fear of the soldiers.

Every Monday for almost two years, there has been a so-called ghost town day as a protest against the government. Almost all shops are closed. Late on a Sunday afternoon, a saleswoman called Joya pulls her wheelbarrow loudly over the street trying to sell her plums. "A bag of plums usually costs 200 francs. Now I'm selling them for 100, later for 50. If I don't sell them today, they'll all go bad. Tomorrow I can't sell them," she says. Her difficulty selling extends to society as a whole, she explains. "Things are not good. Many people are long gone, the city is empty."

Many here blame Cameroon's President Paul Biya for the situation since he has ruled the country for 36 years. At the beginning of October, the 85-year-old once again emerged victorious in the presidential elections, even though people in large parts of the country were not able to vote at all. The Islamist terrorist group Boko Haram is still fighting in the north, in the west most polling stations remained closed because of the conflict between the government and separatists. Biya did not have any campaign dates in the anglophone part of the country. He last visited Bamenda eight years ago.

Government's lack of willingness for dialogue

Cameroonian officials rarely talk to the press about the crisis in the anglophone part of the country. Nevertheless, we go to the governor of the northwestern region's office, and we are lucky. Governor Deben Tchoffo is the president's close adviser and is ready to talk to us. In his reception room, a montage of President Biya hangs next to a lion in military uniform. Below it is written: "Hands off Cameroon."

We had to submit our questions in advance, but just before Tchoffo entered the room, we were told that we would only be allowed to ask the first question. The governor held a short monologue about the security situation: The elections went well, the situation in the whole region is under control, he said. We were trying to find out what he had to say about the accusations against the military. "We are going to address the complaints of human rights abuses in keeping with our laws," he says, rising and leaving. Questions about Gerard Akiata's death are also no longer possible. 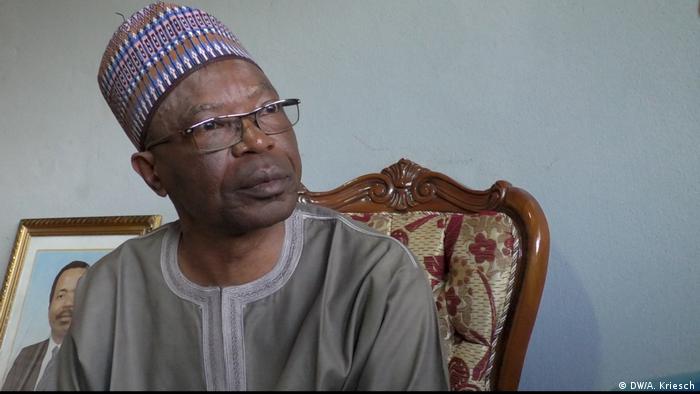 In a DW interview, the region's governor, Deben Tchoffo, insisted the situation was under control and shut down any further questions

The appointment with Governor Tchoffo shows the government's lack of willingness to engage in dialogue, which the Archbishop of Bamenda has also complained about time and again. Cornelius Fontem Esua has demanded a complete amnesty followed by talks between the crisis parties so that the "senseless spiral of violence" can come to an end. Foreign countries can also help with pressure on the government — but so far this has hardly happened, Esua said.

Last week, Germany's parliament discussed the situation in Cameroon, its former colony. Opposition politicians spoke of state terrorism and a president who spent months abroad occupying "entire floors of five-star hotels." Even parliamentarians from Germany's governing "grand coalition" of Christian Democrats and Social Democrats used terms such as bad governance, nepotism and corruption. But in the end, the application for expanded German commitment to contain Cameroon's crisis was rejected.