Cameroon’s government has confirmed that it is holding anglophone separatist leader Sisiku Ayuk Tabe after he disappeared in early January in Abuja, Nigeria. 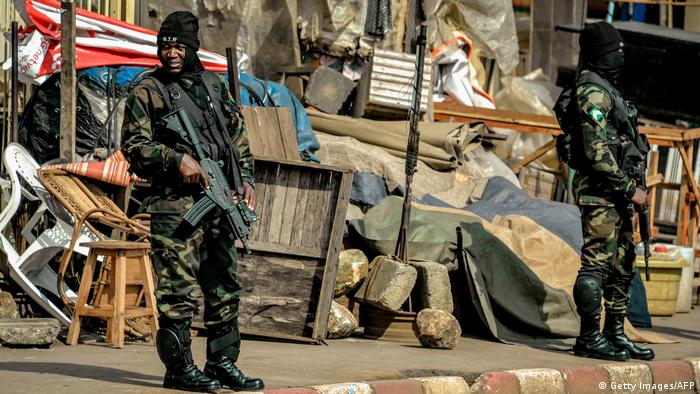 "A group of 47 terrorists, which includes Mr Ayuk Tabe, has been in the hands of the Cameroonian justice system for a few hours," Cameroon’s government spokesman Issa Tchiroma Bakary announced on Monday.

Anglophone separatist leader Sisiku Ayuk Tabe, who in October 2017 declared himself the president of an independent ‘state’ of Ambazonia,  and at least six other leaders were reportedly taken away from a meeting at the Neras Hotel in Abuja on Friday, January 5, 2018.

Both Nigerian and Cameroonian authorities had initially denied the arrest of the separatists. According to their lawyers and Amnesty International, Ayuk Tabe and nine others were held at a hotel in Abuja for the past few weeks. The other separatists were most likely arrested at different points. Local Nigerian newspapers had reported of the arrest of a group of 37 English speaking Cameroonians who were arrested in December 2017.

After initial tension between the two neighboring countries, when Cameroonian soldiers crossed the border in December 2017 to pursue members of the separatist movement, Tchiroma praised Nigeria for its cooperation.

"Cameroon takes this opportunity to commend the excellent coorperation between Nigeria and Cameroon particularly with regards to security," Tchiroma said. He said that both countries would "never tolerate that their territories be used as a base for destabilizing activities directed against one of them."

Clashes re-erupted in December after the arrest of the separatists and resulted in the destruction of at least six villages and casualties amongst both the security forces and civilians in these areas. Patricia Ndifonta, who works for the catholic church and has been assisting people in the affected villages, told DW that she believes the arrest of the leaders may lead to more violence. "What I would tell the head of state is he needs to dialogue with us. In a house, when a child cries you must ask the child what is it, why are you crying? [President Paul Biya] should at least ask us what is the problem."

Origins of the crisis

The unrest in Cameroon began in November 2016, when English-speaking teachers and lawyers in the Northwest and Southwest regions took to the streets, calling for reforms and greater autonomy. They were frustrated with the dominance of the French language in official matters and with what they saw as the marginalization of Cameroon's Anglophone population.

The protests were followed by a harsh government crackdown, as well as internet shut-downs and arrests.

In October 2017, secessionist groups declared the independence of the so-called Anglophone "state" of Ambazonia. International rights groups say that between 20 and 40 people were killed in clashes since late September. According to Amnesty International, at least 500 people were detained in the aftermath of the announcement. The UNHCR reported that it has registered over 7,000 Cameroonians from the Anglophone regions, who have fled the country into Nigeria.

In Cameroon's English-speaking regions, there is mixed support for the separatists and their activities. Evaristus Njie, a businessman in the south-western capital Buea, told DW that he supported the separatists because he believed that English speaking Cameroonians were being marginalized. He would, however, like to see Cameroon become a federal republic. "The government has claimed that they are dialoguing with them. But how can they claim that they are talking with them for  peace to return, while at the same time they arrest them? It is not good," he said.

Emmanuel Wiysahnyuy, a student, said that he supported the government in its actions. "The government is doing everything possible to arrest them so that peace can return," he said.

so (afp, ap) Moki Kindzeka contributed to this report.

The Anglophones in the predominently French-speaking country say they feel like second class citizens. Now some say equality isn't enough - they want independence. (23.09.2017)