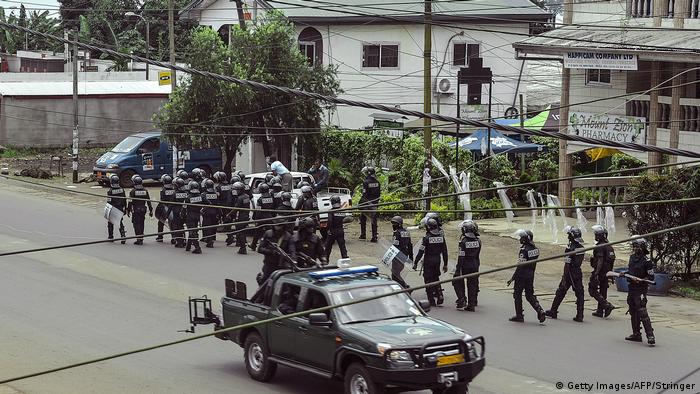 Government forces in the central African nation killed at least eight people and wounded several more amid a crackdown on activists who wish to secede from the country.

One demonstrator was killed by soldiers when he attempted to raise the blue and white Ambazonia flag, which is the name the separatists want for their own state.

Donatus Njong Fonyuy, the mayor of Kumbo, told Reuters that five prisoners were also shot dead after a fire broke out at the local jail. The cause of the fire was unclear.

The anglophones, who make up some 20 percent of the nation's population, complain of being marginalized and not getting their fair share of the country's oil revenue.

Marginalization has long been a complaint, but the separatist movement began gathering steam late last year. Sunday's protests were timed to coincide with the anniversary of anglophone Cameroon's independence from Britain and reunification with the rest of the nation in 1961. The region could have gone its own way back then and become a sovereign state but opted to join their francophone compatriots.

One separatist group made a symbolic proclamation of independence on Sunday.

"We are no longer slaves of Cameroon," said Sisiku Ayuk, who describes himself as the "president" of Ambazonia.

"Today we affirm the autonomy of our heritage and our territory," he said on social media on Sunday.

The recent protests have also become a rallying point against President Paul Biya, who has ruled over Cameroon for the past 35 years.

Read more: Germany and Cameroon shed light on colonial past

Businesses were closed in the region's two main cities, Buea and Bamenda, as army helicopters flew over the largely deserted urban centers.

The deployment included troops from the army's Rapid Intervention Brigade (BIR), a unit that more frequently fights Boko Haram - the Islamist militants occupying much of the north of the country.

Security forces were deployed on the outskirts of Buea and armed with water cannons to prevent a group of protesters from entering the city from a nearby town. The demonstrators chanted and waved the Ambazonia flag.

"I now know that the Biya regime has been raising an army all these years to fight its own people," said one resident, who insisted on anonymity out of fear of reprisal.

"We are simply fighting for our rights, but the military, which is supposed to protect lives and property, has turned into our greatest nightmare," she said.

"We are ready to die for the freedom of our land," Kenneth Agborbechem, one of the protesters, told dpa news agency.

Communications Minister Issa Tchiroma Bakary warned journalists not to give a voice to separatist groups.

"The media must not encourage those who advocate division, who want to destroy and destabilize our country," he told Reuters.

President Biya posted on his Facebook page that he condemns acts of violence "regardless of their source and their perpetrators."

"Let me make this very clear: it is not forbidden to voice any concerns in the Republic," he said. "However, nothing great can be achieved by using verbal excesses, street violence, and defying authority."

The European Union called on both sides to "respect the rule of law and avoid any act of violence."

Bamenda, in Cameroon's northwest, used to be one of the the country's cleanest cities. But with Anglophone insurgency also targeting rubbish collection, the city now has a garbage problem.