British Prime Minister David Cameron is considering banning people from social networks if they were suspected of inciting violence online. The plans have raised concerns among free speech advocates. 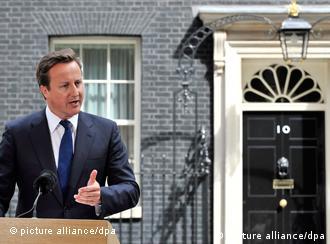 "If people use social networking sites to provoke violence, we must stop them." Those were the words of British Prime Minister David Cameron in the wake of large-scale looting and violence that swept across a string of cities in England this week.

Cameron now wants to raise the matter with the operators of social networking sites to explore the possibility of blocking individuals who might use the sites to violent ends. The premier is even seeking to involve police and security services in the pursuit of potential online troublemakers.

Soon after he made the comments, a 27-year-old man from Hastings in southern England was charged with inciting criminal offences including burglary and property damage over Facebook. An 11-year-old from Plymouth also received a visit from authorities, who proceeded to lecture the youth in the proper use of social networking sites. The girl had supposedly used her Facebook page to call for people to join the riots. 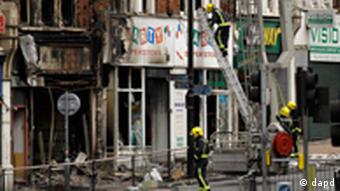 Many shops were set on fire and looted during the riots

An 18-year-old, meanwhile, was also in the spotlight for using her Blackberry Smartphone for the same purpose. Authorities have recently focused their attention on the Blackberry, which sends encrypted messages unlike other providers which authorities have an easier time reading.

But critics have come down hard on the UK government's plans and the actions of British police, labeling them a threat to democracy.

Media lawyer Steve Kuncewicz said that a curtailment of users' rights would be the "most fundamental government interference in online social networking in the past 15 years." Kuncewicz feared such moves could lead to an "erosion of the right to freedom of expression."

"We've seen that even in places like Egypt, Libya or Iran - brutal dictatorships compared to democratic Great Britain - the regimes have tried unsuccessfully to cut off Internet access. The people can always find a loophole."

Online users are similarly outraged. Not even six months ago, Cameron was himself demanding web-based freedom of speech against the backdrop of the multiple revolutions spreading across the Arab world. Cameron praised online social platforms as a "powerful tool in the hands of citizens." 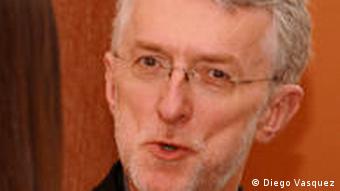 Egyptian blogger Mahmoud Salem, meanwhile, has proclaimed that Great Britain, and with it "the governments of the developed world," would risk "spectacularly exposing themselves" if they tried to restrict access to social networking sites.

Journalist Jeff Jarvis also addressed the topic on his blog, telling Cameron: "Beware sir. If you are planning such measures, what differentiates you from the government of Saudi Arabia?"

Cameron's comments have also triggered sharp reactions in the German-speaking websphere. Blogger Thomas Knüwer called Cameron's proposal "pure idiocy." He said those who "want to filter or block social network sites might as well burn books, open letters and listen in to every phone call." 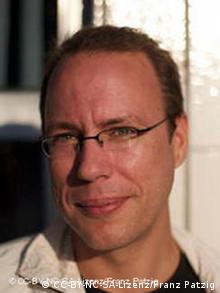 In a reader comment on the website of German weekly Die Zeit, user "Gerry10" said: "If Cameron manages this [blocking access], no other EU politician should ever again complain about the human rights situation in China." Another user, "christoph" asked: "What right does the British government have to randomly curtail the civil liberties of thousands of people?"

Berlin activist and blogger Mark Beckedahl, who founded the website netzpolitik.org, told the German press agency that Britain was already the EU's largest surveillance state. He said many innocent people were already affected by a UK government policy of blocking access to websites, as is common practice in places like China.

But Beckedahl does not blame only the government. He said there is too much reliance on commercial Internet providers and social networking sites, which, he said, had a vested interest in currying favor with governments and going along with policy. 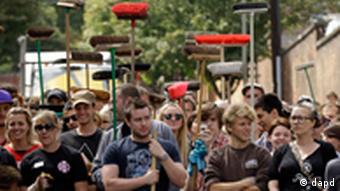 Thousands turned out to help with the clean-up effort

And on this note, the Berlin blogger could be right. A Facebook spokesman said Friday that the company looked forward to meeting with UK government officials "in order to explain the actions we have taken to ensure that Facebook is a safe and positive platform during this time of challenges" and "that all credible threats of violence will be removed from Facebook."

With street violence dying down in recent days, the question now presenting itself is who, literally, will sweep up the shattered remains after the rampage.

Once again, the solution can be found online: A newly-established British project - riotcleanup.co.uk - is showing that the Internet is not only good for organizing the odd riot, but also for dealing with the aftermath.

Police in England have been deployed in full force amid fears of a return of the rioting that blighted London and other major cities earlier this week. Arrests continue as courts work overtime to process defendants. (12.08.2011)

Patrick Regan, founder of youth charity XLP, has witnessed social disintegration in southeast London in the past 15 years. To overcome this and develop their potential, he says kids need early intervention and mentoring. (12.08.2011)

In an emergency parliament meeting, Prime Minister David Cameron has vowed to crack down on rioters. He acknowledged, however, that the initial police response to England's worst unrest in decades had been flawed. (12.08.2011)