International rights organizations are warning of "ethnic cleansing" of minority, Muslim communities in CAR. The UN is calling for an international force to stop atrocities and is sending in emergency food supplies. 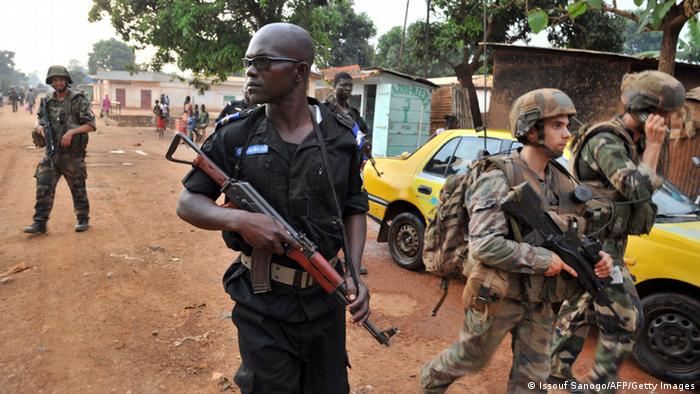 London-based rights organization Amnesty International has reported "ethnic cleansing" of Muslim civilians in the majority Christian nation of the Central African Republic (CAR) and that international peacekeepers have been unable to stop it.

Their comments were mirrored by a report from the New York based Human Rights Watch which said: "The minority Muslim population in the Central African Republic is being targeted in a relentless wave of coordinated violence that is forcing entire communities to leave the country."

Human Rights Watch called on the CAR government as well as French and African peacekeepers to take urgent steps to protect the remaining Muslim population from revenge attacks by predominantly Christian militias and allied residents.

French defense minister Jean-Yves Le Drian was in CAR on Wednesday and called for an end to the attacks on Muslim communities.

UN Secretary General Ban Ki-moon said on Tuesday that CAR could be divided as a result of the sectarian brutality and called for an international force to avoid mass atrocities: "Both Muslims and Christians have been murdered and forced to flee their homes," Ban said. "The sectarian brutality is changing the country's demography. The de facto partition of the CAR is a distinct risk."

"We cannot just continue to say 'never again.' This, we have said so many times," Ban said. "We must act concertedly and now to avoid continued atrocities on a massive scale."

Ban also called on the European Union to accelerate deployment of its military operation, and asked France to consider deploying additional troops. France has sent 1,600 troops to its former colony to work with 6,000 peacekeepers from African nations in CAR.

The 500 to 600 EU troops being deployed are to guard Bangui airport, where 100,000 people have taken refuge so far. That will allow French troops to take up security operations in the capital, Bangui and beyond.

According to the UN, 1.3 million people, nearly a quarter of the population of CAR, need immediate food aid. The World Food Program (WFP) said on Wednesday it would fly a month's supply of food for 150,000 people into Bangui. "This is a rather exceptional operation, our biggest emergency air operation in a long time, bigger that for Syria and the Philippines," WFP spokesman Alexis Masciarelli said.

The humanitarian situation in the CAR has deteriorated since a coup in March 2013 led by the mostly Muslim Seleka rebels plunged the country into chaos. It led to sectarian attacks between the Muslim ex-rebels and Christian vigilantes.