Sweltering heat and severe drought across vast stretches of the EU have damaged crops across the bloc. To cope with the difficult situation, farmers in several countries are demanding special aid. 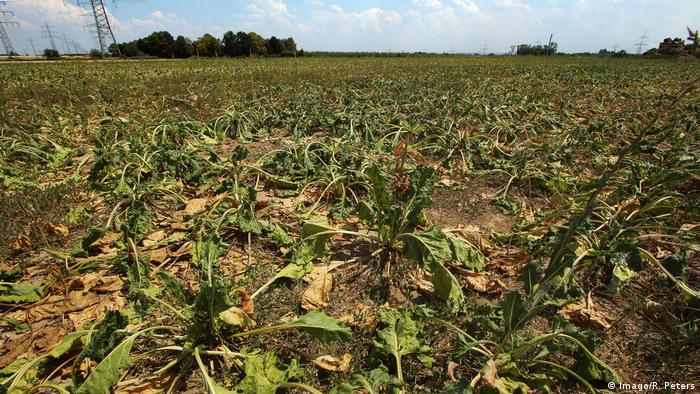 Large stretches of Europe are broiling in unusually blistering summer heat, with the mercury in numerous places rising to record-breaking temperatures over the past several weeks. Heat, however, hasn't been the only problem confronting Europeans, as much of northern Europe is also struggling with a very persistent drought. Many places have seen little to practically no rainfall in recent months.

The climatic conditions have turned fields and outdoor spaces from lush green to a dry, yellow-brown. They have also sparked wildfires in countries like Sweden and Greece.

Furthermore, the intense heat and drought have damaged crops across a number of EU countries, dealing a hard blow to farmers. The damage to maize (corn) crops and grass could also lead to a shortage of animal feed.

There appears to be no respite from the extreme weather conditions in the coming days. On Tuesday, some regions in Germany sweltered as the mercury hit as high as 39 degrees Celsius (102 Fahrenheit).

In Spain and Portugal, temperatures of up to 45 degrees Celsius (113 Fahrenheit) are projected from Wednesday. Officials are making preparations for emergencies during the heat wave expected to continue through Sunday.

Seeking help, various national governments have knocked on the doors of the European Commission. "The Commission is closely following the situation regarding the ongoing and prolonged drought in several EU countries and the increasingly difficult situation that European farmers are experiencing," a spokesperson said Tuesday.

She added that the Commission has already granted a number of member states a "temporary derogation" from certain requirements, citing the example of exempting some countries from an EU environmental requirement intended to promote biodiversity by obliging farmers to leave part of their land fallow. With the exemption, the land usually left fallow "can become a potential source of feed for their animals," the Commission said.

It is, however, unclear whether this measure is enough.

Investments in farmland in numbers

The tough situation has prompted farmers in a slew of EU countries to call for government support. German farmers, for instance, are demanding a special aid package worth around €1 billion ($1.17 billion) to help cover losses resulting from the damage to crops.

"We expect billions in losses," the German Farmers Association (DBV) President Joachim Rukwied said last week. "The government needs to declare a state of emergency so that farmers in areas hit hardest by the drought can be helped directly with cash aid." Adding that German farmers expect this year's grain harvest to be 20 percent smaller than last year, with rapeseed crops down 30 percent. Other crops are also expected to be smaller, he noted.

But the German government has so far refrained from announcing any special assistance. The country's Food and Agriculture Minister Julia Klöckner has said she will wait for her ministry's own harvest report in late August to get a clearer view of the national picture.

"Then we will have a real overview of the situation in Germany," she said on German television, adding that regional state governments could provide local aid if needed. The minister is due to report the situation to the German cabinet on Wednesday.

Other EU countries affected by similar circumstances have started taking measures to ease the pain of farmers.

On Monday, the Swedish government said it had earmarked around 1.2 billion kronor (€116 million, $137 million) for the country's farmers hit by the extremely dry weather.

"We are presenting a national crisis package to Sweden's farmers," Finance Minister Magdalena Andersson told Reuters. "The effect of the extended drought on pastures is causing a shortage of coarse fodder for the animals. And that makes us feel great concern for the Swedish food supply."

Paul Borgstrom, nationwide chairman of the Swedish Farmers' Association, welcomed the crisis package but complained that aid is taking too long to arrive. "Each krona is valuable in this situation, it helps liquidity, but you could also hope that the money would come to the companies even faster," he told news agency TT.

Fellow Nordic countries like Denmark and Finland are also experiencing a period of extreme heat and drought. As Danish farmers watch their crops wither in the fields, reports suggest that the government is mulling over ways to come to their rescue.

The Baltic countries have also been hard hit by the unusual weather, with Lithuania even declaring a state of emergency over prolonged drought. The Lithuanian government estimates the country's farmers might have lost around 15 to 50 percent of the crops due to this summer's severe drought.

Latvia's government, meanwhile, declared a national state of disaster in its agricultural sector last month. As a result, banks will be forbidden from foreclosing on farms, and farmers will get some leeway to finish development projects in time to secure EU funding.

As the drought and high temperatures are forecast to continue in many parts of Europe, calls for government support for farmers could intensify in the coming days.