Business bridges gap between Xiamen and Taiwan | Asia| An in-depth look at news from across the continent | DW | 10.03.2010

Every year at the National People’s Congress, China’s top brass insists that Taiwan belongs to China. But this year there was also great praise for the way cross-strait relations were developing, especially economically. 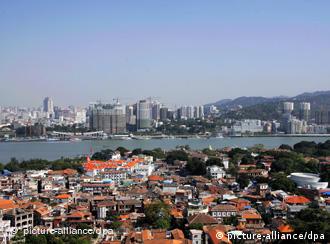 On the island of Xiamen, which belongs to the People’s Republic, people are very attentive to the Taiwan issue – particularly as the Taiwanese island of Kinmen is just a few miles away.

Wu has a convenience store on the boardwalk in Xiamen. Alongside pens, comic books, water and dried fish he also sells Taiwanese products, such as milk tea and cookies.

They go down well with customers, he says. "If regional business is good and people are happy then nobody cares about politics."

For the inhabitants of Xiamen, it’s nothing extraordinary that there’s an island on the other side of the Taiwan Strait, which is separated from the mainland by a border. Many of them have friends and family on Kinmen. There are boats that travel between the two islands. 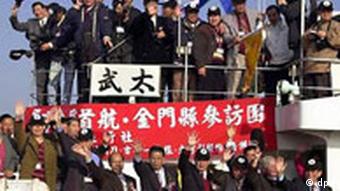 Direct boat-links between Kinmen and Xiamen were introduced in 2001

Calmer situation but there is still tension

However, Wu remembers when things were very different: "In the past, we even heard canon fire here. In the 1950s. Soldiers from Xiamen fired on Kinmen and vice versa. Propaganda fliers were fired over there. There were loudspeakers all over the beaches – some of them were as big as houses. We bombarded them with communist propaganda and they bombarded us with music and anti-communist speeches." 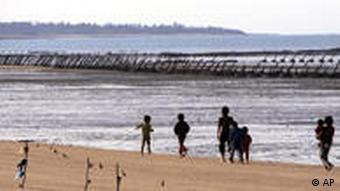 The beach of Kinmen

The situation has calmed down considerably but there is still tension between the two countries. The US functions as a protective power to prevent the People’s Liberation Army from marching into Taiwan and the People’s Republic has missiles directed at Taiwan. One young man in Xiamen has a matter-of-fact attitude.

"Everyone can see that the US uses its hegemonic power to control the whole world. They have got military bases all over the world. Sometimes we wonder how it would be here if war broke out but it’s only speculation. Really, things are very calm here. We’ve got used to it. There have been so many ups and downs but communication has gotten better."

The improved communication can be attributed to the change of power in Taiwan in 2008. The new government does not question the One China Policy as its predecessor did. Both sides are now working towards reunification, although their ideas on how China might look in the future differ. Taiwan is committed to democracy, whereas the People’s Republic wants to maintain communism.

Moreover, Beijing is very insistent that it will resort to force if Taiwan ever declares independence. However, at the moment the situation is calm and the people in Xiamen are pretty sure it will remain so.

"Our strategy is to dazzle Taiwan economically," says one woman. "We will have such close economic relations that Taiwan will be dependent and won’t be able to get rid of the mother country. If Taiwan declares independence China will resort to military means, but at the moment it looks as if Taiwan is becoming so dependent that it doesn’t want to get rid of us."

As elsewhere, in Xiamen, economics seems to be the driving force.

A $6.4-billion (4.6-billion euros) arms deal between the United States and Taiwan has enraged China and threatens to endanger cooperation between Washington and Beijing on key international and regional issues. (01.02.2010)

Soon after Ma Ying-jeou had won the Taiwanese presidential elections in 2008, relations between Taipei and Beijing warmed again. In contrast to his predecessor Chen Shui-bian, who provoked the mainland regime by favouring an independent Taiwan, Ma has pursued a policy of détente towards the People's Republic of China. In an exclusive interview with Deutsche Welle earlier this week, Taiwanese President Ma Ying-jeou talked about cross-strait relations and the Taiwanese people’s views. (10.12.2009)

China and Taiwan started talks in mid-June this year after an almost ten year silence. As a first result, it was agreed to launch direct flights between Taiwan and mainland China. The first flight took off on Friday. (04.07.2008)