Nkurunziza has warned protesters against further demonstrations, linking them to the coup attempt against him. Washington has called on the president to cancel his controversial third bid for the country's top office. 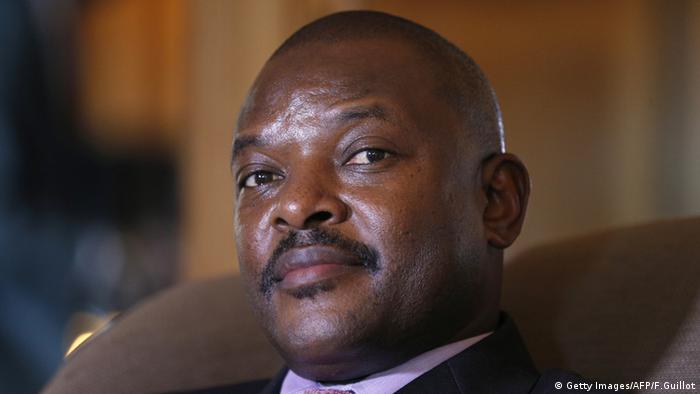 Burundi's president, Pierre Nkurunziza, thanked troops loyal to his administration for quelling a coup attempt on Friday in a televised address to the nation. He also called for an end to the protests against him, linking demonstrators with those who tried to unseat him.

"On the occasion of this memorable day, we want to thank from my heart the forces of defense and security," for putting down #link:18450905:the putsch attempt after two days of heavy battles in the capital Bujumbura.

"It is obvious that the current upheavals are related to the group that wanted to overthrow government institutions," the president said, demanding the protesters, who he has previous called "terrorists," stop their demonstrations immediately.

Violent, deadly protests erupt in Burundi at the end of last month after Nkurunziza announced his candidacy for a controversial third term in office, a move protesters say violates the constitution. However, the country's high court approved his bid, citing that in his first term Nkurunziza was appointed by parliament and not elected, so he is not violating the limit if he runs again in the general election at the end of June.

Coup leader Major General Godefroid Niyombare was forced to flee earlier this week by forces loyal to Nkurunziza two days after declaring he had toppled the president's government.

UN Secretary General Ban Ki-Moon issued a warning to Burundi on Friday not to engage in reprisals or revenge, asking instead for "inclusive dialogue" from both sides.

"Due process and full respect for human rights must be observed," he added. "It is also essential that Burundians are able to fully exercise their freedoms of expression and assembly."

The secretary general's spokesman said that Ban plans to speak with Nkurunziza in the coming days in an effort to resolve the crisis without further bloodshed. Washington on the other hand called on Nkurunziza to abandon the presidential race, saying it would "exacerbate" the situation and create a "potential for further violence," though the US maintains that it recognizes Nkurunziza's legitimacy as leader.

Nkurunziza concluded his speech by announcing that "there is peace in the whole country," that Burundi had reopened its borders, and that Bujumbura's airport was once again up and running.

The failed coup attempt in Burundi has done little to calm fears of a new civil war. UNHCR says more than 100,000 people have now fled the country as a result of political turmoil. (15.05.2015)

Following days of chaos and claims by a military general that the government had been toppled, Burundian President Pierre Nkurunziza says he has returned and regained control of the capital. (14.05.2015)