Bundeswehr night patrol for refugees on Mediterranean | Germany | News and in-depth reporting from Berlin and beyond | DW | 24.04.2016

The Bundeswehr's Frankfurt am Main warship is patrolling the Mediterranean as part of the European Union's Operation Sophia. It's a round-the-clock job for the crew. DW's Daniel Pelz followed the night watch. 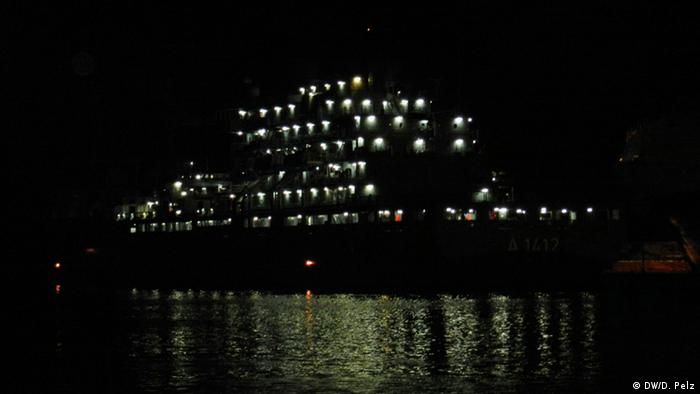 It was a dark night on the Mediterranean Sea, without a star in the sky. Shortly before 2 a.m., the officer in charge on the Bundeswehr warship Frankfurt am Main peered through the big windows on the ship's bridge. The sea was calm; a soft wind blew from the northeast. There were no lights anywhere that indicated a ship close by.

"Generally, these are fairly easy waters to navigate in," said the 31-year-old, who asked to be identified as Martin. "They are quite deep, and there is not much other traffic." As the officer in charge of the navigational watch, Martin was responsible for the ship between midnight and 4 a.m.

About a third of the Frankfurt am Main's 200-plus-member crew works night duty. It's not a relaxing job, and coffee is in high demand. Refugees might be somewhere out there, struggling to cross the sea on small wooden or rubber boats, effectively invisible in the dark.

"We have to be extremely attentive because you sometimes do not see these small boats but you might hear something," Martin said. "During the four hours of night watch, it's important to keep the crew attentive so that we realize when small boats are in the area, find out what is happening and assist them when necessary."

The crew kept their eyes on their instruments. A few days before, about 500 people had drowned in the Mediterranean when their boat capsized. "Such events do stick in the back of my mind," Martin said. "Now that we are in an area where such events happen, I tell myself that I have to be extra attentive." 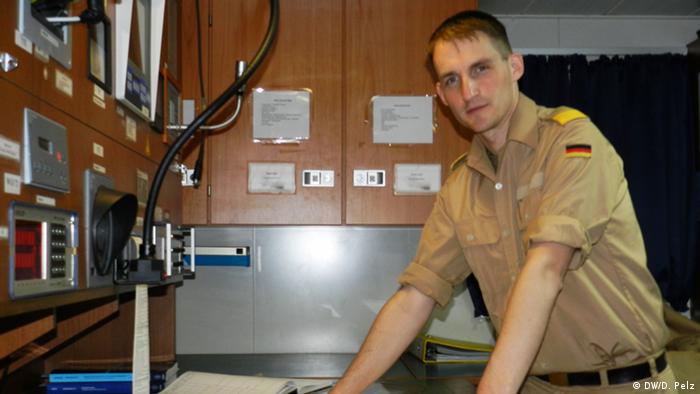 A 27-year-old technician named Jan was checking the two diesel engines that hummed deep inside the belly of the ship. Day and night, technical staff make regular rounds to check the ship's engines, the water heater and air-conditioning systems. The narrow corridors were empty as Jan made his round; all systems were working normally.

"When I walk around down here, I sometimes think about my girlfriend and wonder if she's still out or already in bed," Jan said. On land, chances are high that he himself would also be out late with friends on the weekends.

The nightshift does have one advantage: It allows for precious moments of privacy on a ship where most crew members have to share their cabins. "You have the whole crew around you during the day," Jan said. "When I walk from one room to the next during the night watch, I can assume that I'm not going to meet anyone. So I have a chance to sing some songs out loud and I don't have to be afraid that someone will hear me." 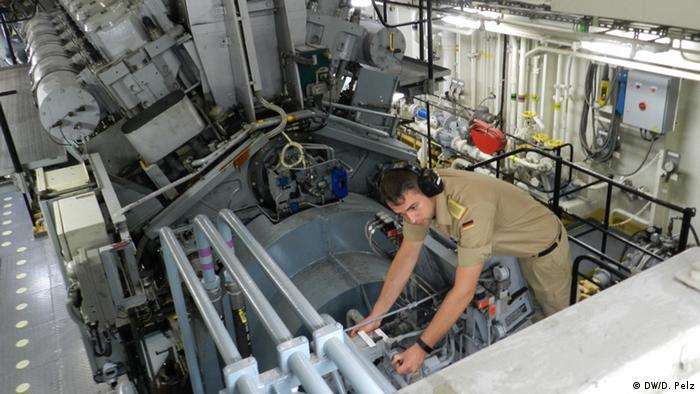 While keeping the engines humming, Jan thinks about his girlfriend and sings to himself

Twenty-nine-year-old Florian, one of the Frankfurt am Main's two bakers, listens to Caribbean pop songs on his smartphone while he prepares breakfast for his sleeping shipmates. From 9 p.m. to 6:30 a.m., Florian bakes 16 loaves of bread and several rolls and croissants for the crew. "Nobody tells me what to do," Florian said. "I can decide which bread and pastries I prepare."

Florian and the other baker alternate nights and days on a monthly basis. On land, he would also work the wee hours, having trained as a baker before signing up for the Bundeswehr. "I wanted to see the world," Florian said, "so I decided to join the navy." An oven buzzed in the background. The first batch of bread was ready.

The baker has already sailed to Canada, Dubai and East Africa on navy ships. "It's great to see different ports, meet different people and also sailors from other navy ships," Florian said. 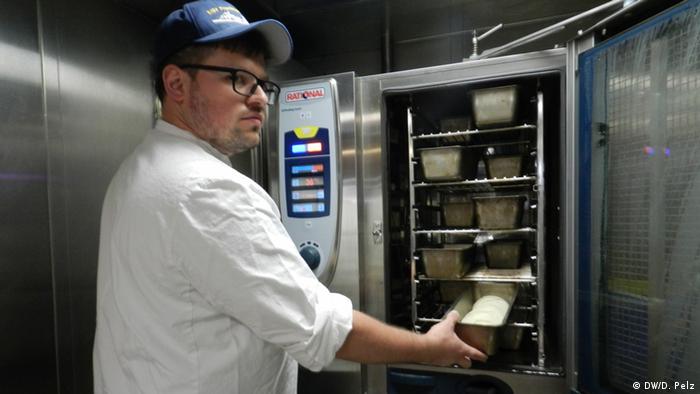 After his shift, Florian sleeps until evening. He catches up with his dayshift crewmates during the evening meal. "They are taking supper," Florian said, "and I am taking breakfast." He laughed, and then he turned back to his baking.