It wasn't pretty, but Stuttgart finally got their first home win of the Bundesliga season. The 2-0 win over struggling Mainz was important but perhaps didn't always showcase the best of Pellegrino Matarazzo's side. 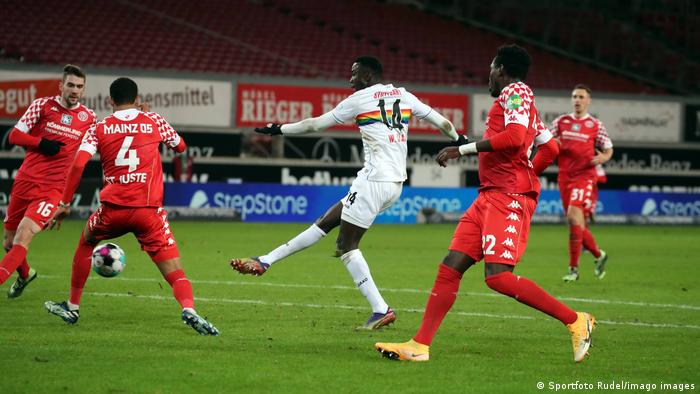 Stuttgart have done a lot of things right since promotion. An array of exciting young talent spearheaded by Silas Wamangituka has led them to midtable safety (they now sit 15 points clear of Mainz) and won plenty of admirers.

But until Friday night, they hadn't won a home game in the Bundesliga since May 2019.

A drab first half suggested that wasn't about to change and the rapid, incisive counterattacks that have led them to the league's third best away record just didn't work in their own back yard, particularly against a team as unambitious as Mainz.

But Pellegrino Matarazzo, the American coach who studied maths at Colombia University, found a way to crack the code.

Sasa Kalajdzic hasn't found the net in 2021 but, at 2 meters tall, offers a different kind of threat. His selection was a surprise but the method of his goal was not. The Austrian broke the deadest of deadlocks shortly after the break, heading in an inviting Borna Sosa cross.

"An amazing cross. I chat to Borna every week and every day I say 'today is the day' and today it finally was," Kalajdzic said after the game.

The calculated gamble had paid off and now Stuttgart's strengths could truly emerge. Mainz's blunt attack floundered and Silas, Sosa and Nicolas Gonzalez, such a consistent threat around German grounds, could finally sense blood in their hometown.

It was Wamangituka who struck the fatal blow, with a demonstration of some of the qualities that have made him one of the breakout stars of the 2021-21 campaign.

The Congolese winger picked up the ball on the edge of his own area and immediately drove at his opponent, committing the man as early as possible before a drop of the shoulder sent him haring free. Mainz couldn't muster another challenge, let alone stop him and, after a wasteful first half, the 21-year-old made no mistake in lashing home his 11th league goal of the season.

Hanging on to talent

The immediate challenge for Matarazzo is to build on the result that broke the drought. The longer term one is to keep hold of Silas, Gonzalez and co.

Harmony in the boardroom would help in that aim. And the sight of sporting director Thomas Hitzlsperger beaming proudly in the stands wearing the special rainbow insignia designed to show Stuttgart's tolerance perhaps served as a reminder to the fans watching at home that unity is not a given, but can be restored.

With the savvy recruitment of Sven Mislintat as sporting director, the coaching smarts of Matarazzo and the heritage and infastructure of a traditional German giant, the ingredients are there. On Friday, Stuttgart finally got the recipe right at home.

Bundesliga players to watch this season

Bundesliga players to watch this season